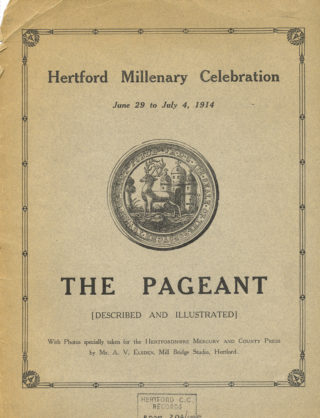 The souvenir programme for the Hertford pageant

Historical pageants were a regular feature of British life in the first half of the 20th century, especially during and shortly after the Edwardian period (1901-1910), although they were also popular in the 1930s, 1950s and in some places even as late as the 1970s. They took the form of open-air theatrical re-enactments of significant events from local and national history, usually presented in episodes like acts in a play, in which thousands of people were involved, either as organizers, performers and backstage workers or as spectators. Every character was resplendent in full costume and as well as scripted scenes there were dances, singing and music, resulting in a truly spectacular entertainment for the local community that was both social and educational.

Historical pageants were generally associated with ‘historic towns’ such as Chester, Liverpool, Manchester, York, Oxford, Bath and London, but they also took place in smaller communities throughout England, Scotland and Wales. In Hertfordshire two of the most notable pageants were those held in St Albans in 1907 and Hertford in 1914.

The Hertford Millenary Pageant took place in the grounds of Hertford Castle from Monday 29 June to Saturday 4 July 1914. On 27 January 1914 the Mayor, Alderman William F. Andrews, convened a meeting at the Shire Hall to discuss how the town might celebrate its forthcoming millenary, and it was eventually decided that a pageant would be the best way to do this. Further meetings took place over the next few weeks and gradually ideas took shape, funding of approximately £1,700 was guaranteed (including a generous donation of £100 from Lord Salisbury), and ‘pageant fever’ started to build in earnest among the public. Weekly meetings of the Grand Committee were held under the chairmanship of the Mayor, with Mr H. W. Doyle as General Secretary.

An event of this kind required an enormous amount of organization. For about four months prior to the start of the pageant a huge number of people, mostly volunteers, devoted countless hours to making the necessary preparations to ensure the pageant was a success. Several rooms in Hertford Castle were given over to the planners and these became known as Pageant House.

It was here that all aspects of the pageant were presided over by the Pageant Master, Mr Charles H. Ashdown, from St Albans, who was also responsible for the words and lyrics of the pageant.

Mr Ernest H. Oram was appointed Stage Manager and he oversaw all the rehearsals. By all accounts much of the success of the pageant was down to him as he proved to be very skilled both artistically and in the way in which he directed and encouraged the very large cast of amateur performers – over 600 in total. These were all local people – men, women and children – drawn from a wide range of backgrounds and occupations, plus about 150 students from Haileybury College in nearby Hertford Heath.

While the performers were busy learning their lines and rehearsing their roles, much activity was going on behind the scenes.

The props, which largely consisted of an impressive range of weapons and armour, were all made in Hertford by a team of workers beavering away in the cellars of the Castle under the direction of Mr J. Wood. The items they made ranged from iron headgear and helmets, crossbows, battle-axes and shields to chain mail and full suits of armour.

The costumes were the responsibility of the Mistress of the Robes, Mrs Charles H. Ashdown, who was a recognized authority on historical costume and the author of a book entitled British Costumes During the Nineteenth Century. Also based in the Castle, she directed an enthusiastic group of amateur workers, male and female, who produced a vast array of splendid costumes. These included beautiful dresses, robes, tunics, coats and costumes of various styles according to the period of history represented in the different Episodes of the pageant, as well as a wide range of accessories such as head-dresses, hats, ruffs and crowns. Judging from photographs taken at the time, the historical detail was impressive and the quality of the workmanship was high. 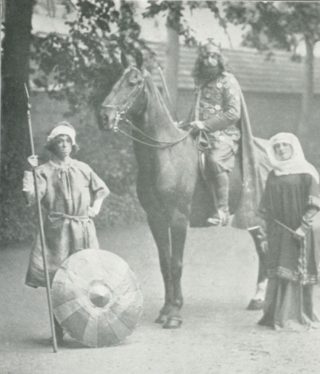 Some of the medieval costumes that featured in Episode II 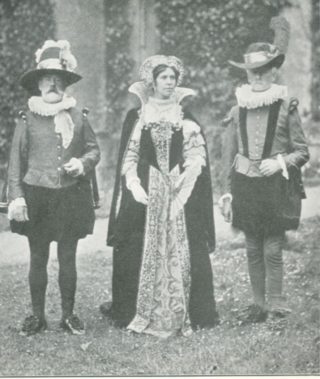 Some of the Elizabethan costumes that featured in Episode VIII

The music was a particularly important part of the pageant and was entrusted to Mr James L. Gregory, the organist of All Saints’ Church. In his role as Music Master, he composed much of the original music for the pageant, which was performed by a chorus of 85 singers and an orchestra of 35 musicians. The majority of these were all local people – quite an achievement.

A week of pageantry

Before proceedings started on the first day, 29 June, a well-attended thanksgiving service was held at All Saints’ Church. The Mayor, accompanied by members of the town council and other officials, all of whom were dressed in full ceremonial robes, processed to the church where they were greeted at the entrance by pupils from Hertford Grammar School.

Tickets for the pageant cost 3s 6d, 5s 0d, 10s 6d and 1 guinea, and could be obtained not only in Hertford but also from Keith Prowse and Thomas Cook in London. Special trains were laid on from the capital and reduced fares were available for all those who had a pageant ticket. 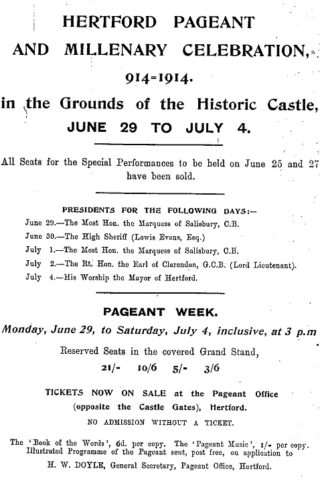 Advertisement in The Hertfordshire Mercury, 20 June 1914

The theme of the pageant was Hertford’s history from the earliest recorded date in Saxon times, 673, up to 1561. Eight key historical events during this period were highlighted in a series of dramatized Episodes in which numerous performers took part. Starting at 3 p.m., each Episode lasted for about 3 hours and was presided over by a daily Pageant President. These were: The Marquess of Salisbury (Monday 29 June); Lewis Evans, Esq., High Sheriff of Hertfordshire (Tuesday 30 June); The Marquess of Salisbury (Wednesday 1 July); The Earl of Clarendon, Lord Lieutenant of Hertfordshire (Thursday 2 July); Colonel Louis Cheney, Deputy Mayor of Hartford, Connecticut, USA (Friday 3 July); and Alderman William F. Andrews, Mayor of Hertford (Saturday 4 July).

Episode I recorded the meeting of the first synod of the English church that took place in Hertford in 673. 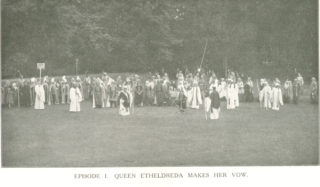 Episode II told of the defeat of the Danes by King Alfred the Great in 896. 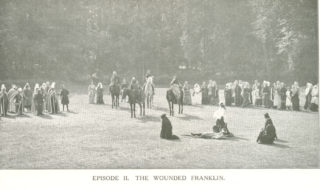 Episode III showed the rebuilding of Hertford in 914 by King Edward the Elder, explaining how it became a stockaded burgh. 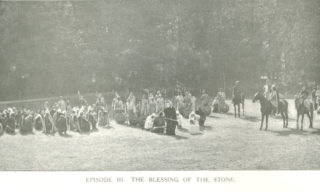 Episode III: The Blessing of the Stone

Episode IV covered the siege and capture of Hertford Castle by Louis, Dauphin of France, in 1216. 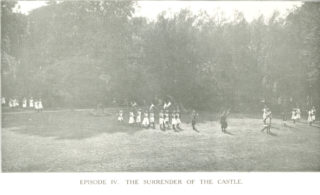 Episode IV: The Surrender of the Castle

Episode V marked the meeting of two royal prisoners in Hertford Castle in 1357, King John of France and David Bruce, King of Scotland. 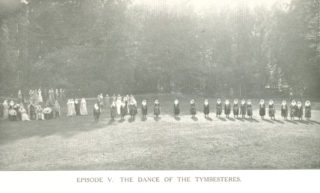 Episode V: The Dance of the Tymbesteres

Episode VI showed the granting of a charter to the town by Henry VI’s wife, Margaret of Anjou, in 1451. 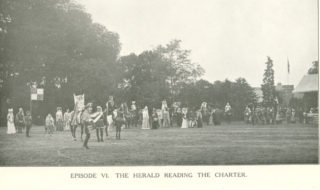 Episode VII told of the dissolution of Hertford Priory in 1533.

Episode VII: The King’s Commissioners and the Prior

Episode VIII celebrated the visit of Queen Elizabeth I to Hertford Castle in 1561. 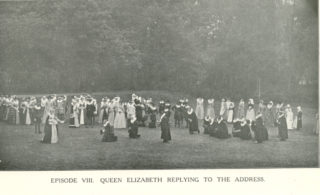 A party of American visitors from Hartford, Connecticut, in the USA, including Colonel Cheney, the Pageant President on Friday 3 July, was invited to the pageant by the organizing committee. They represented the town that had been founded by former Hertford resident Samuel Stone in c. 1636. They stayed in London for most of their visit, but on Tuesday 30 June Lord Salisbury invited them to dine and stay overnight at Hatfield House, before attending the special presentation that took place during the pageant the following day.

Freedom of the Borough 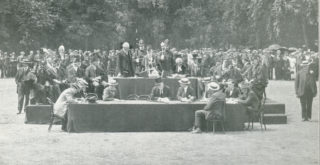 The presentation of the Honorary Freedom of the Borough to the Rt. Hon. Arthur J. Balfour, MP

Wednesday 1 July was a particularly notable day as this was when the Honorary Freedom of the Borough was presented to the Rt. Hon. Arthur James Balfour, MP, former Prime Minister (1902-1905) and Leader of the Conservative Party (until 1911), who had represented the borough of Hertford from 1874 to 1885. At a grand ceremony the Mayor, William F. Andrews, presented Mr Balfour with a magnificent decorative silver casket to mark the occasion.

The calm before the storm

The week’s events were concluded on Saturday 4 July with a procession of as many as 700 performers (all in full costume) and backstage staff through the town, accompanied by a band and with church bells ringing, and finally a dance in the grounds of the Castle during the evening. The pageant had been a great success, no doubt a huge source of pride for all the people of Hertford, and it must have been much enjoyed by all who had come to see it or who had participated in it.

Little did they know at the time, however, that the clouds of war were gathering rapidly and that in only a few weeks’ time the country would be on the threshold of one of the worst conflicts in history – the First World War. In the dark days that were to follow Britain’s declaration of war on Germany on 4 August, many must have looked back nostalgically to that carefree summer of 1914 when Hertford joyously celebrated its past in such a spectacular fashion.