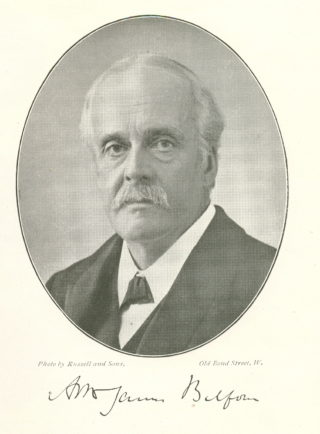 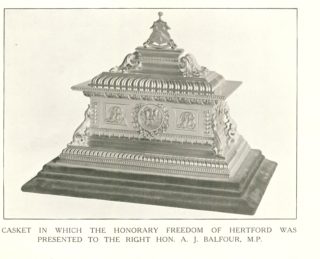 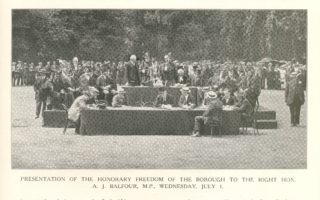 On 1st July the Freedom of the Borough was bestowed upon Arthur J. Balfour, former Prime Minister, who also had been MP for Hertford. William F. Andrews, the Mayor, presented him with a silver casket to celebrate the event.

This presentation was part of the Millenary celebrations to celebrate the founding of Hertford in 914.

Balfour was a Conservative politician who was member of Parliament for Hertford from 1874 to 1885.  He succeeded his uncle, Lord Salisbury as Prime Minister and held the office from July 1902 to December 1905.  He remained Leader of the Conservative Party until 1911.

During the war he became First Lord of the Admiralty and later Foreign Secretary.  During his tenure of this latter office he wrote a letter stating the Governments view on Palastine which became known as the Balfour Decleration.

The declaration stated that the Government view was to “favour the establishment in Palestine of a national home for the Jewish people” on the understanding that “nothing shall be done which may prejudice the civil and religious rights of existing non-Jewish communities in Palestine.”

Presented to the Right Hon. Arthur James Balfour, M.P. With the Honorary Freedom of the Borough.,

In recognition of his distinguished service to the Empire as a Statesman, and his faithful representation of the Borough in Parliament from the years 1874 to 1885.”

The casket was designed and manufactured by the Goldsmiths and Silversmiths Co. Ltd., of 112 Regent Street, London.  This company also supplied the accompanying photograph which is taken from the supplement.