The Prince of Wales, future George V, and his wife opening the new chapel in 1906
Hetrfordshire Archives and Local Studies 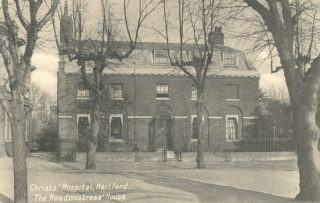 Margaret E. Robertson, 50, Headmistress, lived in the mistress’ house with Helen, 53, her sister, who lived off private means, and Archibald, 23, her nephew who was a civil servant for His Majesty’s Government. Margaret was born in Dawlish, Devon whilst Helen, came from Sywell, a village about six miles north east of Northampton and Archibald hailed from Durham City.  Jacqueline Cooper1 describes Miss Robertson as “a wonderful head”.  In 1900 the first girls went to University and Miss Robertson “developed the sporting side with a gym, playing fields and swimming baths as well as a chapel.”

Emily Bugby, 20, from Irthlingboro again in Northamptonshire, was the parlour maid and Emma Smith, 31, from Cambridge, was the cook in the mistress’ house.

Miss Robertson had been the headmistress at least since 1894 and continued until at least 1917.  Previously she had been an assistant teacher at Bedford High School, now called Bedford Girls’ School, having been merged with Dame Alice Harper School.  Both Bedford schools were founded in 1882 by the legacy of  Sir William Harpur.

In the assistant mistressess’ house lived the following teaching staff:

There was obviously not enough room for all the mistresses to live on the site as a further seven lived along the road at 80, Fore Street. 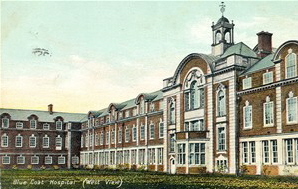 Included in the hospital service were the following: 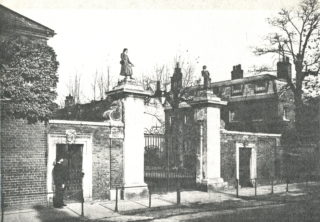 Is the man standing by the main gates the steward, John Frances Baxter Sharpe?

John Francis Baxter Sharpe, 65, Steward, from Southwark, London was living with Ella Clara Sharpe, 60, his wife, from The City of London. They had been married 39 years and had four children one of whom, Maud Mary Florence Sharpe, 27, lived with them. Patrick Ramsay Laird, 23, a student H.M. civil servant from Edinburgh was a visitor.   Unfortunately John died later in that second quarter of 1911 and was succeeded by William E. Mclean.

John Frances had been the steward since at least in 1881. In 1901 he was living with his wife and one of his sons, Edgar Cecil Sharpe who was an associate of the Institute of Actuaries and Clerk to London Life Association, and born in Tottenham.  Maud was then a student and John’s father, also called John, 84 years of age and a retired “Foreyn” fruit merchant, lived with them.  Ada Florence Andrews, 17, from Bull’s Mill two miles north of Hertford, had been the cook, and Lucy Elizabeth Taylor, 18, the housemaid from Letty Green, 3 miles west of Hertford.

In 1891 John Frances was living with his wife, his widowed father, his son Harold John Sharpe, 16, born in Tottenham and Edgar then 15.  Both Harold and Edgar were students.

In 1881 another son Granville, 3, born in Aldersgate, London, was living with the family.  In 1871 John Frances had been living with his family at 9, Montague Villas, West Green Lane, Tottenham and was working as Commercial Master at Christ’s Hospital, presumably in London, whilst his dad was a fruit salesman.  In 1861 they had been living in Tottenham and John Frances was described as a commercial teacher, and his father was a fruit merchant, with five other children.

Jessie Edith Brace, 16, kitchenmaid domestic, from Great Amwell, one and a half miles south-east of Ware.  Jessie was one of at least 15 children of Arthur, 43, a bricklayer’s labourer living in London Road, Hertford and Alice, 46, born in Little Amwell.  In 1901 he had been a domestic coachman in Great Amwell where he was born.  He had been a general labourer in 1891.

William Dunkin Fenning, M.A., 59, was the chaplain.  He lived at 10, Queen’s Road, Hertford with, Katherine Dunkin, 63, his sister and their servants John, 47, and Sarah Dimmock, 45.  William had previously been a Classics Schoolmaster and later Clerk in Holy Orders at Haileybury College since at least 1881. The Fennings had been born in Bloomsbury, London.