I have been involved, as an outside Contractor, with Hertford County Hospital, and it occurred to me that the general public might be interested to know, why certain outward changes were apparent between say 1950 and 2020. I don’t profess to know the designed workings of the site, and I may be picked- up on some of this contribution, but I welcome new facts. From an unknown date in the first half of the twentieth century, until the mid nineteen eighties, the heating and process steam for the site was supplied by a boiler house off the access lane, that exits the site into Cross Road. As you entered the site by the normal route, facing the main Hospital building, there was, over to the left, a small building, I think the Path. Lab, and this bordered the lane above, down the left hand side of which, were low pre-fabricated buildings.
The boiler house was on the right hand side, heading towards the Cross Road exit.
Inside were two, possibly three, but I photographed two, twin-furnace Lancashire boilers, probably about ten thousand pounds of steam generation, per hour, each
They were doubtless coal-fired, but my pictures show that they had been converted to oil firing, probably heavy oil, necessitating the use of oil heaters.
There was an approx. one hundred foot brick chimney next to the boiler house.
Pipework would have been run out to the entire site, for steam heating, steam to water heating and process steam, for sterilisation via autoclaves in the CSSD dept.
I have pictures of the brick chimney, which was visible from some distance away.
By the mid-1980s, not only had local autoclave steam plant become the norm, but the larger Hospitals in the area, had doubtless changed the role of this site.
The old boiler house was removed, and the main building heated by a series of four, if my memory is correct, LTHW boilers, in the left hand basement plant room, of the main building, with an attached brick chimney up the left-hand flank wall of the main block.
Again in this Century, changes were made. The main old block was developed as apartments, and the outlying buildings to its right, and the rear wards, corridors, canteen, etc., were demolished. A new Hospital building has been erected to the left of the main original block, and the lane to Cross Road, is no longer used.
If there are responses to this contribution, I do have photographs to support some of the text, plus if course, additional memories of the work involved.

I will now go into more detail regarding my earlier piece concerning this site, and the two plant rooms that I knew, up until the forming of the new Hospital, to the left of the old main building. I have included two photographs of my own, and some names of staff from my memory.
One of the photographs shows a steam boiler in the remote boiler house. The other shows the boiler house itself, with adjacent brick chimney, in the service road leading to Cross Road. The old main building, can be seen in the distance, scaffolded, ready for the painting of the frieze at high-level.
I mentioned last time, the cellar boiler house in the old main building, and the substantial brick chimney for that, can still be seen, running up the left-hand flank wall.
I recall certain mechanical staff. Mr. George Pope, in the steam boiler house, Mr. Ken Anderson and possibly Mr. Ted Smith, over at Rockall, the large house they used for meetings, opposite the clinker-walk and bus stop in North Road. Their manager was I think, Mr. Peter Kirk.
There was a daily maintenance fitter for the site, who’s face I can recall, but not his name.
Any replies to these contributions, would be of interest. 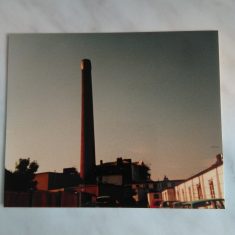