School of Industry for Girls 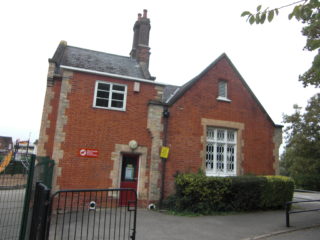 The School building in October 2018

The School for Industry for Girls often referred to as Brown Coat School was set up in the eighteenth century with the aim of preparing girls for service in the large houses in the area.  Three ladies from the Society of Friends (Quakers) established the school in 1793.  The school started in Water Lane Cottages and moved briefly to West Street. before being settled in this building.

The fiftieth anniversary was celebrated 1843.

According to Kelley’s Directories, in 1851 to 1855 Mrs Mary Jane Bates was mistress of the school.

This building was erected in 1855 with the aim of educating 56 girls.

According to Kelley’s Directories the following ladies were mistresses of the school:

The family came from Hatfield where Caroline’s father had been a bricklayer/mason.  Caroline died aged 78 in 1927 in Hertford. The building is now part of Abel Smith School.

Miss Butterfield retired as mistress of Abel Smith suffering from ill-health in 1914.  She was succeeded by Kate Davis who moved from Bristol and was chosen out of 94 applicants.