My favourite place in Hertford 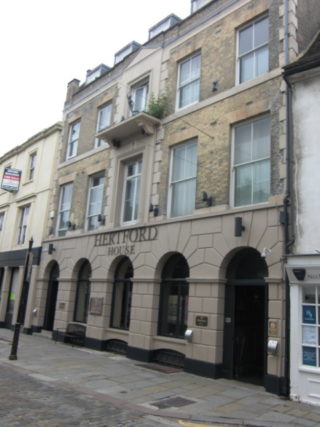 I have interviewed the owner but also some of it is my own point of view.

My favourite place in Hertford is the Hertford House Hotel. The Hotel opened in 2007. Before being a Hotel it was the home of the mercury newspaper. Before the mercury newspaper the printers Stephen Austin had their printing factory there. The building is number 1Fore Street and is late Georgian early Victorian. The people who own it (Nick and Wendy Shipton) bought it in 2006. Many people who worked for the mercury newspaper said that the building is haunted. They are in a book called Haunted Hertford. But they have not seen any ghosts yet only spirits. They have 22 bedrooms. My favourite food on the menu is the burgers and for pudding I like to have strawberries and crushed up marang covered in cream.

The kitchen closes at 4o’clock on a Sunday, but be careful sometimes the oven is broken so don’t even bother leaving because they always fix it. They don’t only have an indoor restaurant the have an outdoor restaurant.