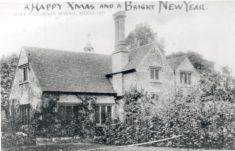 What had originally been Hale’s Free School was now called Hertford Boys’ Grammar School.  The buildings consisted of the original school building which was opened in 1617 with the addition in 1887 of a further building containing a science laborator and classroom on the first floor with two rooms beneath.  In 1888 the main building was given an extensive renovation with new windows in the single classroom and the addition of a porch and belfry. 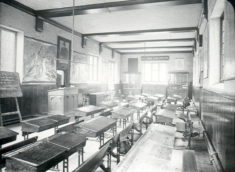 The school was run by a board of Governors which often included the mayor of the borough, however the master was appointed by Earl Cowper until the last earl died in 1905.

In 1914  George William Kinman, MA,  was the master of the school.  Mr. Kinman was described as “far from affable and friendly and was unable to keep his temper.”  However Captain WE Johns, (the Biggles author), an old boy of the school, reported on a visit to the school, of Mr. Kinman  “ …with tears in his eyes, he told me the names of the boys of my time who had gone in the war and would not come back.”

In 1900 HGS had bought Bayley Hall, a fine Queen Anne mansion, for the Master’s dwelling and the original Master’s House on Fore Street was sold.  Bayley Hall had a frontage in Queen’s Road, a short distance west of the original Master’s House.  Boarders were also housed in the hall.  In 1911 four assistant masters – George Ormrod (23), Leonard Crosland (23), Frank Morrell (22) and Emile Boyer (22) from France –  lived in the hall along with Kinman (48), Rosa Maud (49) his wife, Phyllis Lavington their 12 years old daughter, Elizabeth Dawson (69) the cook, Aaron King (51) the butler and James Threadgold (23)  groom.

The school possessed an open-air rifle range & furnished a contingent of the Junior Division of Officer’s Training Corps.

1n 1905 Ware Grammar School was amalgamated with HGS.  In the following year new classrooms and an assembly hall were built at a cost of over £3,000.

Most of these schools were all-through schools where children were taught from five (or younger) to fourteen. 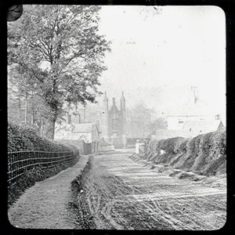 This school was situated in London Road just below the junction with Mangrove Road.  It was built by subscription from the county generally, as a memorial to Henry Cowper of Tewin Water, formally chairman of Quarter Sessions & endowed by him with £1,093 18s 9d (Kelly’s directory.)

In 1914 the Master was John Richard Strubell2 who had nine assistant masters.  There were approximately 300 boys.

John Strubell had been master and examiner to the Governors since March, 1885.  He had previously been Master at a school in Marylebone.  He was to be master for 39 years retiring in 1924.

Len Green in his booklet “The Cowper School’3 called the master, “Mr. Strubel the Great “.  During Mr. Strubel’s time the school expanded, the curriculum was extended and each year the HMI reports contained high praise for te work done in the school resulting in increased government grants.  In 1912 the County Council recognised his work by increasing his salary by £10 (estimated to be £1,800 today!)

In 1913 the school was given a garden behind the Medical Office in Fore Street (opposite Christ Hospital.) This garden was used to cultivating crops in WW1.

Green Coat School had been sited in Church Street but when that building became too small a school was built in 1867 in London Road just down from Cowper School. The school closed as an independent school in 1890.  In 1914 it was used for woodwork & drawing by boys from Cowper School with Oliver Sharp was the manual instructor. 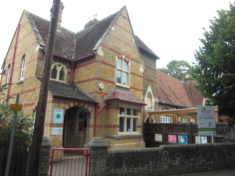 Abel Smith Memorial School for Girls was located in Church Path now Churchfields.  It was erected in 1861 to house the girls from Cowper School as this school was overcrowded. On Monday 22nd July 1861 in a Founding and Dedication Ceremony the school was dedicated to Abel Smith of Woodhall Park.

Miss Caroline Butterfield who had previously been mistress at the School of Industry for Girls was mistress with five assistant mistresses.  Miss Butterfield  resigned through ill health in 1914.  Miss Kate Davis who came from Bristol was appointed in her place.  Miss Davis was selected from 94 applicants.  In the summer of 1915 Miss Davis was supported by one certificated teacher Miss Norma Strubell (21) 1915 (daughter of John Strubell, Master of Cowper School, see above) and three uncertificated assistant teachers Miss E Smith, Miss M Cooper and Miss G Stocks.  Miss M. Acheson from Cowper School assisted with the Upper Division.

All Saints’ Church ran a Sunday school for the young children who were taught religious instruction and reading.  By 1846 an Infants School had been built on Glebe land to the east of the church.  The School of Industry for Girls occupied a building close to the Infant School and in 1902 the two schools were combined to make All Saints’ Infant’s School.   Miss Lucy Trear was the mistress.  The school admitted children under five years of age until on 4th May 1916 a communication was received from The Clerk of the County Council that children under five years of age were not to be admitted for the duration of the War.

St. Andrew’s School in Hertingfordbury Road was built in 1875 for 126 mixed (boys & girls) & 113 infants.  In 1914 Miss Miller was mistress of the school with Miss Nora Turnbull in charge of the Infants.  This school was controlled by six managers with Rev. Nathaniel T. Gardner, St Andrew’s Rectory, Hertingfordbury Road, as correspondent

Christ Church in Port Vale with part fo the school just visible behind the church.

Christ Church Infant School behind the church was built in 1868 for 109 children.  According to Kelley’s Directory, 1914 the average attendance was 84.  Marion Louisa Porter was the mistress.  This building which has been extended is now the home of COP’s Little Theatre. 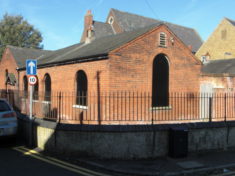 Cowbridge School in Dimsdale Street was built in 1862 for 160 mixed and 44 infants.  In 1914 there were 231on the books (registered with the school.)   Walter Turpin had been the master since February, 1889 and Miss Page was the infants’  mistress.  The school was controlled by a sub-committee of fifteen with H Doyle, 9, St Andrew Street as clerk.

Cowbridge School had been overcrowded for some years and HMI threatened to cut the grant to the school unless something was done about it.  His report of December 1913 included: 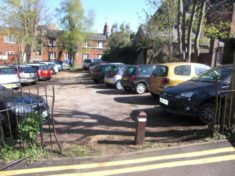 By 1914 one class, Standard III (Year 5) was using Cowbridge Halls to relieve the overcrowding in the school and there was a plan in place to build a new school to house the boys on Port Vale.

The Inspector was aware if this plan but stated in his report that the old buildings would then require considerable improvement to make them satisfactory for girls and infants.  He went on to state that it may be a question whether the fabric is worth this.  Among the alterations needed would be the clearance of the offices (outside lavatories), the provision of adequate playground and using the present lobby as a communication corridor.

The playground was extended in that year by the addition of the area to the north of the school.

St. John’s School in St. John’s Street was a mixed Roman Catholic school which had been built for 76 children but in 1914 was catering for 90 children.  Sister Mary Berchmans was the mistress.   The school was next to the church4 and it was controlled by six managers with Rev. Francis Spink, The Presbytery, St John’s Street as correspondent.

Bengeo Boys’ School was built 1849 on land given by William Parker of Ware Park for 124 children  In 1914 William Elliott Hyatt was the master.

Bengeo Infant School was added to the Boys’ & Girls’ Schools about 1868 for 78 children.  In 1914 Emma Buckle was the mistress.

There was also a Church of England school at Waterford.  Mistress Martha Ryle (nee Cordell) had been mistress since 1873.  She retired in February 1916.  Miss CH Smith followed Mrs Ryle until July that year and she was followed by Mrs Mabel Howell who stayed until the school was closed in August 1932. 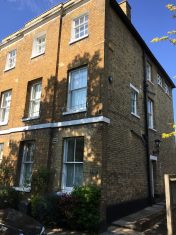 Miss Florence Hucks ran a private, day school at 7, Port Hill – Hertford School for Girls and Preparatory School for Boys.  Miss Hucks also offered lessons outside school hours in English, French as well as pianoforte and singing. Miss Hucks began her school in Townshend Street and she had taught girls up to 17 until Ware Girls’ Grammar School was opened.  She retired in 1935 when she was presented with a gold watch and chain

Three sisters, Elizabeth Medcalf, Emily Louisa and Florence, Martha Morris ran a Ladies school and kindergarten at 55, Ware Road.  These ladies were all born in the 1860s, Elizabeth in 1862, Emily in 1866 and Florence in 1869.

Danesbury or Bengeo College a private school in Bengeo “in which the sons of clergy and gentry are prepared for the public schools” was on Warren Park Road, Bengeo.  It had extensive grounds including a cricket pitch.  In 1911 Charles Hayward, aged 49, was Master.  His widowed sister was his housekeeper.  There were one matron, a nursery governess and seven servants living in the school building.  Twenty-eight boys, aged from 8 to 13, were boarding.  Winifred Grafton, aged 7, was also staying at the College on the night of the census.  The building had 38 rooms.

Rosa Hilton (02.02.1859 -1941 ) ran a school including a small number of boarders at 28, West Street.  Rosa was born in Watton where her father was the elementary school master.  In 1891 Rosa was nursery governess to the younger children of Thomas Lingley, vicar of All Saints Church and Rector of St John’s in Hertford.  By 1891 Rosa was living at the house in West Street running her own school.

There was also a Convent School opposite the Church in St. John’s Street, Hertford.  In 1898 three Sisters of Mercy from St. Joseph’s Convent in Chelsea5 had come to establish a convent school in a house opposite the church which the sisters had bought.6  As well as teaching at their own private and boarding school the sisters also taught at the parish school (St. Joseph’s) opposite.  in 1914 Miss Julia Doyle was Mistress.  In 1911 Miss Doyle with five teachers and 17 children boarders aged from 4 to 16 years. lived at 22 – 24 St John’s Street either at the convent or next door to it.  They were supported by a cook and a laundry woman.

In 1911 Christ’s Hospital with Miss Robertson as the mistress accommodated 255 girls with 17 staff according to the census. (The boys had been moved to Horsham in 1902.) 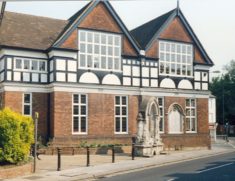 Hertford Library at Old Cross with the School of Art occupying the top floor.

Hertford School of Art was situated above the Hertford Library at Old Cross.  The school’s Headmaster was Mr. John Wood who lived at 12, Stanley Road with his wife and two children.  His assistant was Miss Annie Alice Heaton, aged 30.

The school year ran from 1st June to 31st May so children would be moved up to next year group on 1st June.  The summer holiday would not be until the end of July or early August.

The school day started at 9 am. with RE at 9:15 for half-an-hour.  Any child withdrawn by their parents from RE could arrive at 9:45 a.m. for the rest of the day.  The school morning finished at 12 noon with everyone going home for lunch.  The afternoon session started at 2pm until 4:30pm although in the winter schools often started the afternoon session at 1:30pm and finished half-an-hour early to allow children to get home before it had become too dark.

Each school had its own  timetable a strictly followed.  This timetable had to be agreed with the HM Inspector who conducted a formal inspection once a year and visited at other times.  Any divergence from the timetable was noted in the log book.  Reading, Writing & Composition, Recitation, Arithmetic, Science (Object lessons), PE/games, knitting, painting, technical drawing, singing were the subjects taught.  Particular emphasis was on the three Rs – reading, writing and (a)rithmetic.

Church schools had a diocesan inspection every year where the inspector checked and reported on the children’s knowledge of the Christian Festivaks & Seasons, Old & New Testament, the Scriptures, teaching practical & moral lessons from the narrative  & the Catechism.  The Inspector also reported on the behaviour in the school.