You are here: Home>Towns & Villages>Hertford>Education>Hertford Green Coat School & the Newton Exhibition Foundation>Chapter 3: The Last Few Years of the School

Chapter 3: The Last Few Years of the School 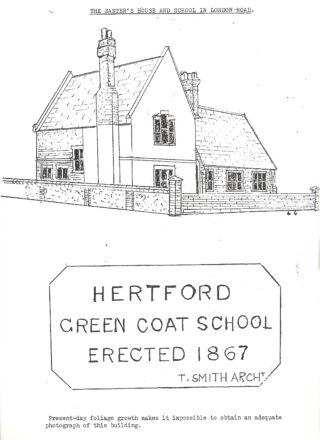 The Green Coat School in London Road. It has been demolished and a car park occupies the site.
Len Green 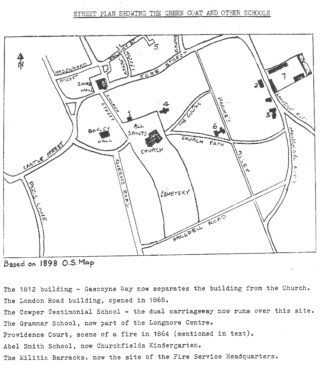 The Last Few Years of the School

The log book entries and the minutes of the meetings of the Trustees together give a good account of the events leading up to the final closing in 1894. Some years before there seems to have been some financial difficulty, for on 27 April 1885 the Trustees decided that all parents of pupils be given six months’ notice that, after that time, they would have to pay threepence per week for schooling. In January 1887 Mr Flack was instructed to receive no more pupils until further notice and in May of that year a limit of 30 was imposed on pupil numbers. The Treasurer was also required to see if the cost of the clothing could be reduced. The difficulty was probably due to decreased local financial support: the Act of 1870 had provided elementary education not needing private funding. In September 1891 Mr Flack recorded that for several weeks boys could not attend church for want of clothes, although he sent a few of the tidier ones. New clothes came in October.

But earlier that year, in March 1891, the Trustees had obviously considered closing the school, for they discussed a scheme which the Charity Commissioners might sanction: this would mean sending the boys to National Schools, clothing them from Charity funds, and awarding some scholarships to the Grammar School. The scheme also suggested a pension or gratuity to the Master. No action was taken at this time. Early in 1892, Mr Flack attended a meeting of the Trustees at which he claimed he had been appointed to the school for life. The Trustees refuted this, and ordered Mr Flack to give a written withdrawal of his claim, or he would be given immediate notice to leave.

In January 1892, the report was received from H.M.I. of an inspection the previous December. It was very critical of the teaching of most subjects, as well as of the failure of Mr Flack to keep proper records of attendance, or a cash book and accounts. Nor was the previous year’s report entered-in the log book. The report concluded –

‘Unless a more favourable report is received next year, the school may be declared inefficient and removed from the list of Certified Efficient Schools’.

After the receipt of this report, there is a regular entry one day each week of the number present that day. This shows very low numbers on many occasions, and some days when none were present. However, when unexpected visits were made by members of the Inspectorate in July and September 1893, 21 and 20 boys respectively were present. Other entries in the log book are chiefly reports on the misbehaviour and impudence of certain boys interspersed with the noncommittal ‘Usual progress’.

On 31 January 1894 Mr Flack was instructed by Rev. T. Lingley to admit no more boys to the school. The school was again visited by an inspector on 20 April as a result of which the following was received from the Education Department, Whitehall:-

‘I am directed to forward the annexed copy of a Report sent by E.M. Field, Esq., H.M. Inspector to the Education Department of the result of a visit without notice to the above-named school on 20th day of April, 1894 by Mr Kifford, H.M. Sub-inspector. This report will be referred to when the next grant falls to be paid and must be copied verbatim into the Log Book and signed by the Correspondent of the Managers in accordance with Article 24 of the Code.

The school was visited at 11.10 a.m. The Master was not present. The biggest boy in the school was writing Standard III sums on the blackboard. The registers had not been marked since Wednesday last, no totals had been entered since the beginning of the present quarter (this being the third week). Mr Kifford also notes an entry in the Log Book, dated Jan. 3lst., 1894, to the effect that no more boys are to be admitted.

Some explanation of this entry made by order of the Managers seems to be required. On a previous occasion (September 22nd., 1893) Mr Kifford found the registers unmarked in the school. I am to request an explanation’.

Here are the last few entries in the log book:-

A sorry end to what had been, in its best days, a very good school.

When the building near All Saint’s Church was finally vacated by the School in 1868, it was bought by Mr Henry Gilbertson for £100. On the Ordnance Survey Map of 1898, it is marked as a mortuary, and it remained so for many years, connected with Fentiman’s undertaking business. During the 1970s it was converted to a dwelling house, which still retains most of the building’s original external features.

The building in London Road was let in 1896 to the Managers of the Cowper school at a rent of £5 per annum, the managers to pay all rates and taxes as well as maintaining the building. In 1907 the tenancy was transferred to the County Council at a rent of £15 per annum, the dwelling house being let to the managers of the Cowper School for £5 p.a. It continued to be used by Hertfordshire Education Department and during the inter-war years was on two separate occasions equipped for the teaching of woodwork to Cowper School boys. In 1932 it was offered to the County Council, but they would not purchase it. Finally it was equipped to provide school dinners for pupils of the Abel Smith School, until they no longer needed it when their new school was built. In 1972 it was sold to Neale’s Garage for £20,000 and was occupied for some time by ‘Bridgewater Windscreens’. Its present owners have announced their intention of demolishing it to use the site for other purposes.