Reading, writing and arithmetic for a penny a week 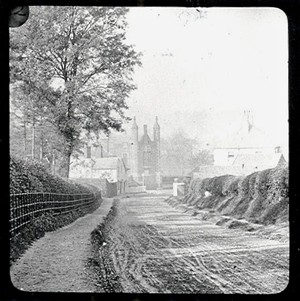 The lawyer Henry Cowper, born in 1758, was a cousin of the poet William Cowper and lived for much of his life at Tewin Water House. He was called to the bar at The Middle Temple in 1775 and later became Clerk Assistant to Parliament and Clerk to The House of Peers. He was a notable philanthropist and donated £14000 ­– well over £600.000 today – towards the building of Hertford County Hospital. He also endowed schools at Tewin and Hertingfordbury.

In 1840, the Governors of the County Hospital met to discuss ways of showing appreciation for Henry Cowper’s generosity, and it was from this meeting that the idea to build a school, paid for by public subscription, emerged.

The school opened on 11 October 1841 and admitted children from the age of six. The fee was 1d.per week, and in the first week 120 pupils were registered. In 1870, the school became subject to The Education Act, which allowed for a grant of between 8 and 10 shillings per year for each pupil, depending on attendance. This could be reduced however if pupils failed to reach the required standards in the three basic subjects: reading, writing and arithmetic. The Act also set out the conditions of training for Pupil Teachers who were selected from promising scholars at thirteen and given, in effect, an apprenticeship which allowed them to be qualified by the age of eighteen. Pupil Teachers were much in evidence at The Cowper School.

From the summer of 1863 it became necessary to keep school logbooks. They not only give an insight into the running of the school: the challenges and difficulties, but also tell us much about life in and around Hertford and the surrounding area. There are two of these logbooks for The Cowper School. Here are presented extracts from the first of these covering the autumn term for the years 1863 to 1890.

The School finally closed in July 1957 at which time the Headmaster was Cyril Stally: remembered by one pupil as being strict, but a true gentleman and wonderful teacher. The original building, which stood at the junction of Mangrove Road and London Road, was demolished in 1964, to make way for the dual carriageway.

For a full history of the school please see: Green, Len, The Cowper Testimonial School, Hertford: A History of the School, 1992, Hertford and Ware Local History Society, occasional paper No.3