The Opening of Cowbridge School

Cowbridge School was opened on 5th January, 1863 in Dimsdale Street. The building was designed by T. Smith & Sons to accommodate 160 mixed, junior children and 40 infants.  The building was built by H. Norris.

The land on which the school was built was bought by members of the Hertford Congregational Chapel.  There was a chapel fronting Cowbridge but it was in a delapidated state.  It was decided to build a new chapel, since it would cost little more than affecting repairs to the existing one. It was designed in the early English (Gothic) style whilst the schools were to be substantial structures but in the simplest style with classrooms.

Thomas was born in Newington Butts in London.  His father was the Kent County Surveyor. Thomas came to Hertford in 1823.  As well as Cowbridge School and the accompanying Congregational Church, he also designed a number of other notable buildings: North Crescent, the General Infirmary in North Road and the Cowper Testimonial School in London Road. He designed and lived in North Road House.  He also had an office in Bloomsbury, London. 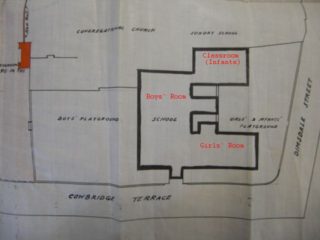 Plam of School with playgrounds

The plan of the school

The school was heated by coal fires in each room and presumably gas lighting until an electricity supply was connected on 1st October, 1938.

The estimated costs for the building and furnishings were as follows: 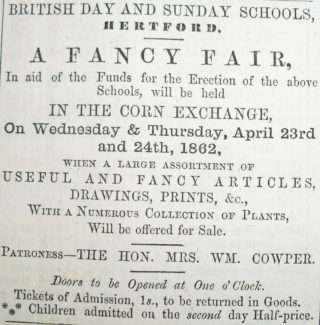 Advert for the Fancy Fair in Hertfordshire Mercury, April 1862

There appeared to be a shortfall of £228 7s 6d but this was covered by the proceeds from a ‘Fancy Fair’ held at Shire Hall in April 1862.  A band played to entertain the customers.  This fair raised a total of £210.

After the school had been built there was still a shortfall and so the ladies of the chapel held a Christmas Tree on Wedesday & Thursday, 14th & 15th January, 1864 at the Corn Exchange.  The tree was said to be nearly 30 ft tall and a remarkably fine, spruce fir which had been presented by Earl Cowper.  The tree was illuminated by fifty star-light gas-burners and decorated with flowers and flags interpersed with a numerous assortment of fancy and useful articles.  There were also stalls for the sale of similar articles.  In all £55 was raised.

By 1861 he had established his own company employing 32 men.

The Laying of the Foundation Stone

On Wednesday, 16th July, the foundation stone was laid bt Rt Hon W. Cooper, MP, in the presence of a considerable number of friends of education. He said that friends of education of the town of Hertford have long felt the urgent necessity of establishing a British School. There had been difficulties in finding a site and funding it. Now Cowbridge is being built in a very centre of populous and improving district of the town and distant from the other schools.

The school was scheduled to be opened in October.

Inside the foundation stone were placed the coins of the realm along with copies of Hertford Mercury & Herts Guardian.

Cowper considered education of the working classes absolutely essential to the prosperity of the nation and urged parents to make the sacrifices necessary to send children regularly and for as long as possible. Children needed to learn obedience, attention & application; sound knowledge and the development of reasoning faculties.

Sir Minto Farquar, Bart, MP considered that there was no greater advantage for the country than by giving an education to the great mass of people, founded on The Bible.

* The plate or ceiling plate is fastened along the top of the wall to support, in this case, the roof