The school re-opened after the Easter Holiday on 13th April 1915 as a girls’ and infants’ school, the boys having transferred to Port Vale Boys’ School with the previous Cowbridge head, Walter Turpin.

The school was open for a week before Miss Lethem took up her duties as Headmistress on Monday, 19th April.  At that time there were 96 girls and  55 infants {151 children in total}.  When children reached the age of 14 they were able to leave school and quite a number must have done so by the following January since only 125 children were on the roll after the Christmas break. 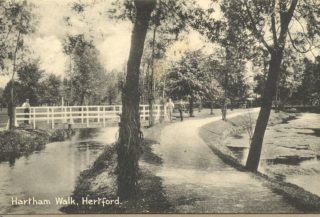 The children went on trips much more than they had previously, e.g. in 1915 classes went to Hartham to study trees; to Waterford Marsh to examine water plants and visited Molewood.  The following summer the senior girls went on a walk to collect medicinal herbs.

In 1920 the senior girls went to St. Leonards Church when Mr. Jenning gave them a talk about the church.

Later, more adventurous trips were undertaken.  The senior girls went to Southend presumably as a summer treat in 1922 but needed a small sale & open day to raise money (£15/5/-) to help fund the trip.

Presumably the trip to Southend was for pleasure, but more cultural trips were also undertaken. In September 1922 twelve girls visited Westminster Abbey with the headteacher on Thursday afternoon.

Sometimes the outside world came to Hertford.  On the afternoon of October 1922 the senior girls (Standards V. VI. VII) visited a Cinema (presumably the Castle Cinema) with the headmistress to listen to a lecture on Paraguay and its people.

As there were under Mr Turpin, there are many references to poor attendance because of sickness.  Even the teachers suffered, e.g. Miss Lethem was ill from 22nd May, 1917 only returning to school on 18th June.

The school was closed for a month from 15th May 1916 because of three cases of “spotted fever among the children”.1

Every Christmas a “Breaking up Concert” was held and after the establishment of Port Vale School, the two schools usually had a joint concert and prize giving at Port Vale.  This was often held on the afternoon/evening of the last day of the autumn term.  Managers and their wives attended and prizes were given for excellent attendance.  The children sang for the visitors and then had tea followed by games.

In the prize giving on Wednesday, 20th December, 1916, two girls gained prizes for 5 years perfect attendance, quite an achievement considering the frequent outbreaks of various illnesses and the often poor winter conditions in those day.  In 1915 a child was given a watch which must have been worth a considerable amount of money at that time.

The first mention of an autumn half-term holiday was in 1916 when the children had Friday 27th and Monday 30th October as holiday.

In the week beginning 20th September 1915, Mr W. Graveson Esq. presented the school with a harmonium to accompany the children’s singing.

In the week beginning 24th January, 1916, Cowbridge Trust granted £10 for a School library.

Occasionally the war came to Hertford.  In the week beginning 11th October, 1915 the attendance was below 80% owing to the Airship Raid which killed four men in Bull Plain.

It was still “poor” the following week when the girls became involved in a positive way in the war effort which included making splints which were sent in a parcel to Red Cross Society in November. 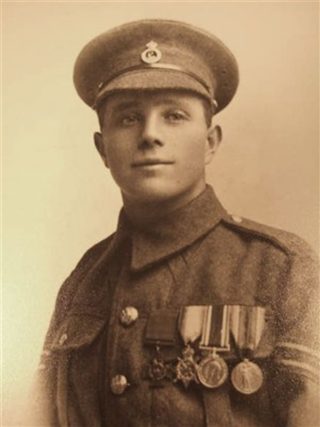 What must have been a significant event in every child’s life occurred in February 1916 when at 3:30pm on Monday, 14th the teachers & scholars went to Port Vale School to  welcome Corporal Alfred Burt V.C. an old scholar of the school and presented him with a cigarette case.  Burt had been awarded his VC for ripping the fuse out of a German mortar in the trenches thus saving an estimated 20 lives.  Presumably the children were in awe of such an individual, the only VC to have been born in the town.

The German submarine campaign was reducing considerably the amount of food reaching Britain from abroad so it was not surprising that HMI in October 1917 considered the eagerness of the staff and girls to cultivate a small plot of unoccupied land nearby deserved encouragement.

And thankfully peace finally arrived.  The school was closed on Monday afternoon (11th November) because the Armistice was signed at 11 o’clock on that day.

However it took quite some time to properly celebrate the end of hostilities.  It was not until Friday, 18th July, 1919 that the infants were moved into the standard school so that the infant room could be readied for a soldiers’ lunch the following day.  The following Friday, the last day before the midsummer holiday, the school was closed in afternoon to celebrate Peace.  Tea was served and games were played.

Later that year on 11th November the school’s first remembrance ceremony took place when a 15 minutes service was held in the morning for Armistice Day.

On Friday afternoon, 11th February, 1921 several girls went to see “Allenby in Palestine”3 at the Corn Exchange at 5pm.  The school was opened at 1.45 and closed at 3.45 to enable the girls to get there in good time.

The influenza pandemic of 1918 took its toll on the school when it was totally closed for a period of three weeks from 14th October to 1st November.

Although there are many occasions when epidemics had a disruptive effect on the school, thankfully, only rarely are deaths recorded.  Unfortunately one such occurrence happened in  the week of 26th – 30th July, 1920 when there were four cases of diphtheria in the school  with two of the children dying.

In September 1920 measles affected attendance whilst in January 1922 it was sickness and in November and December of that year whooping cough kept children from their studies.

Although the boys played inter-school football matches under Walter Turpin, as can be seen by the old picture of boys team in 1915, the first mention of inter-school sports for girls was in 1921 when the first netball team played at Rye Park School and was soundly thrashed 30 – 0.

Clearly not an auspicious beginning.  Perhaps the Rye Park girls had had previous matches or the Cowbridge girls were over excited or overawed.  The latter seems likely since only a fortnight later there was a significant improvement in the score when the Rye Park team played a return visit and only won 19 – 7.  Even better news came a week later when the girls beat  Hoddesdon C .of E. School 11 – 3.   What excitement and pleasure there must have been at this first win.

Published in 1919, ‘Stoolball Illustrated And How To Play It’ by Major W W Grantham who was responsible for the games revival in 1919

The next development on the sporting front came in mid-April when Major Upton visited the school and took the Senior girls for stoolball and baseball.  Stoolball2 was a game where you defended a wicket as in cricket but that wicket was a square piece of wood at shoulder or head height and the ball was bowled under arm on the full.  At that time every time the batsman defended the wicket successfully she was awarded a point.  In Mid-July eleven girls played a match away against Ware Central School only to lose  by 50 -18.  Was it the same girls who played netball and stoolball or did the school allow different girls to play?  No matter, the girls could celebrate that autumn finally overcoming Rye Park at netball at home by 18 -13.

There are further references to sporting activity and the HMI report of 1922 comments that physical training including organised games & swimming received more attention than in many schools.

Miss Lethem left on 27th July, 1923.  No reason is given for her leaving and there is no indication of where she went.

1 Spotted Fever is an infectious disease brought on by bacteria carried by ticks.  In the Hertfordshire Mercury, Saturday, 24th April, 1915 it was describes as being cerebro-spinal fever (meningitis) with the following clinical features: profound disturbance of cerebro-nervous system indicated at onset chiefly by shivering, intense headache or giddiness

2  Stoolball   Originally the idea was that the batsman defended the “stool” or wicket gaining a point every time he/she did so.  This was extended to a similar scoring system to cricket with runs and fours & sixes if the ball went over the boundary.  Stoolball Association for Great Britain was formed in 1923 by Major W W Grantham.  It was very popular and in 1927 there were over 1000 clubs.  The Association ceased to operate in 1942 probably because of the Major’s death in that year.  The game is now run by Stoolball England

3 This was presumably footage by Harold Jeapes which included the symbolic entry on foot of Allenby and his entourage into Jarusalem in 1917 unlike the Kaiser who had entered on horseback.