Walter Turpin was Headmaster of Cowbridge School for 26 years, from 26th February 1889 until 31st March 1915 when, along with the boys, he moved to be Head of the newly opened Port Vale School. The girls and infants stayed at Cowbridge School. Mr. Turpin was sorry to leave the school after such a long association with it but his leaving was made “very pleasant by the girls giving me a small present”.

In April 1895 there is mention of the school attendance being the highest ever at 164. The actual number on roll would have been greater but we do not know by how much. To teach these children were four teachers. In the HMI report of 1894 these were listed as: one male pupil teacher and two female teachers, one provisionally certified teacher and one working under article 68 of the (Teaching) Code, as well as the head who was a certified teacher.

The managers appear to have been concerned to give the staff as much remuneration as possible since on 25th January 1898 it is recorded that £29.2.6 of a special grant was put towards increasing the teachers salaries. In January 1899 the sum of £48.12.0 was used for the same purpose and again in December “most” of £51 of an Education Department Grant was again used to increase the salaries. This is probably a symptom of how poorly the teachers were paid.

Mr Turpin had problems with the quality of staff and after several changes he writes in late October 1896:  “The school is going on better than I have ever managed with any other staff”.

Staff were often unqualified and were given extra lessons after school. Also on one occasion a teacher left to join the Civil Service. Mr Turpin appears to have worked hard to improve standards and by the HMI report of 1900:  “The school continues to be very carefully taught and in some points with much success…….. The general progress of the school however is encouraging and the order is good.”

And by 1914 “In the difficult circumstances of the premises {cramped conditions, see later} much of the work reflects credit on the staff. It is strongest on the written side.”

The children seem to have been organised into one Infant class (aged 5 – 7) with a separate teacher and Standards I to VI, equivalent to Years 3 to 8 today, i.e. aged 7 to 13. In November 1895 the log book records that Mr Turpin took charge of Standards IV, V & VI whilst the other three teachers had one Standard each, assisted by monitresses.

The school year ran from July 1st to June 30th. The children were put into their new standards at the beginning of July, although they could be kept back as the log records in 1901 “Only a small number were kept back.”  After two or three weeks the children went on their Summer Holiday.

Children in the top class could sit an exam to win a scholarship to the grammar school (Hertford for boys or Ware for Girls) but there is only an occasional mention of this happening.

On 1st October 1903 the school, along with Christ Church Infant School, became the first elementary school in Hertford to come under County Council control.

Attendance was affected badly by adverse weather and by various outbreaks of infections, e.g. whooping cough, mentioned on 14th Dec. 1895; measles in October to December 1897:  “Dec 13th to Dec 17 School goes on without much life owing to the wretched attendance.” and measles again in May 1900. In September 1891 the school opened two weeks late due to an outbreak of scarlet fever which carried on into November.

The Infant Class was closed in April 1902:  “The number of Infants away was so many that Dr Dunn, the Health Officer closed the Infant school for 3 weeks from April 24th. (This is the first mention of a Health Officer!) .

At the same time the log book records,  “The school has never been so much upset for years as during the last few months, on account of Scarlet Fever, Diphtheria, and Measles.”

By February and March 1914 mumps was a problem.

The type of lesson sometimes had an effect on attendance also, so that in May, 1884:  “May 21 – 25 Owing to the terribly bad attendance every Thursday afternoon for weeks past especially in Standard IV, I have changed the two lessons C. [Copy] Books and Grammar so that Grammar is taken on Tuesday and Thursday morning.”  [Of course the children went home at lunchtime.]

Occasionally outsiders came into the school for various reasons.  “On Thursday {8th July 1897} Mr Rolfe Temperance Lecturer gave a lecture on “Alcohol” and later on in the same afternoon Serj. Inst. Clark gave the boys in Standards IV, V, VI {Years 6,7,8} a lesson in Drill in the yard.” Both these events happened a number of times!

On 23rd September 1902 the children had their photographs taken which I should imagine caused a great stir!

An HMI inspection occurred once in the summer and, if necessary, at other times as well. The report for 1894 states:  “The work of the school has improved since last year and the elementary attainments are now as a whole very fair.”

The report for 1895 states:  “There have been changes in the school staff and a considerable amount of strain has been thrown upon the Master in consequence, the present staff being young and inexperienced.”

This theme continues into the next report:  “The Master would probably conduct this school better if he had more experienced assistant. As it is he does not succeed in properly controlling the instruction and discipline of the lower Standards.”

By 1887:  “Satisfactory progress is being made on the whole, although the work of the first standard is still uneven. The class subjects have been successfully taught. The discipline of the school has improved especially in the second and third standards, but it has yet to become thoroughly good.”

The HMI who wrote the report for the year ending June 30th 1898 seems to have had an enlightened view, stating, “The children should be taught to observe, to express themselves and to realise what they read. They should learn more principles and perhaps fewer facts.”  This was at a time when rote learning was very much the norm.

By 1900:  “The school continues to be very carefully taught and in some points with much success. ……… The general progress of the school however is encouraging and the order is good.”

Two topics which continued to be a problem were spelling and “oral” work by which the inspectors were referring to answers to questions on reading matter.

Holidays were: one to one and a half weeks for Easter, a week for Whitsun, four to five weeks in the summer and two to three weeks for Christmas – no autumn or spring half term breaks! The school does not seem to have finished early enough in the summer of 1900, since,  “Attendance fell off rapidly at end of week owing to some other schools having left off for summer vacation.” 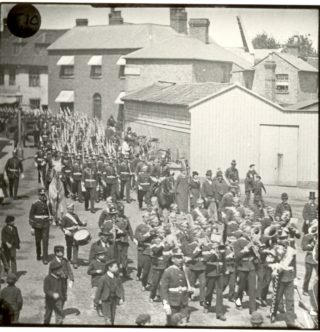 The returning malitia parading to Hartham for a service 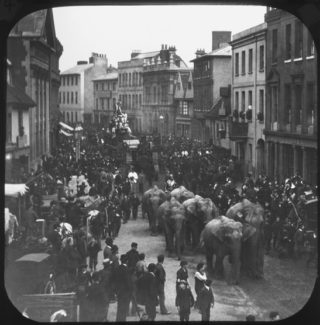 Occasional holidays, a half or whole day, were given for such events as a circus coming to town and Sunday School outings. Holidays were also given for special events such as, on 1st March 1900 for the relief of Ladysmith , on 21st May, “the relief of Mafeking & Baden Powell” and on 2nd June 1902 “Peace Celebrations” [end of The Second Boer War] and, ten days later, for the return of the “Herts Malitia from the front” which “…greatly affected the attendance for the rest of the week.”

“On 10th November, 1896 “On Tuesday the school closed as a holiday on the occasion of the Lord Mayor of London giving the children a treat.”  The mayor was Sir George Faudel-Phillips who resided at Balls Park on the outskirts of Hertford.

I suppose that the children were pleased that Queen Victoria had lived for so long, as in 1887 – “June 21 to June 25 Jubilee week. Holiday on Tuesday and Wednesday and Friday afternoon. Attendance good considering the holidays.”

As mentioned earlier, in April 1895 the school attendance was recorded as the highest ever at 164. The number of children fluctuated but was generally on an upward trend. By 1897 we find that:  “H.M. Inspector reports that the class formed by the second and third standards is habitually too large.”

And the following year:  “…..the Infants’ room is habitually used for a larger number of scholars than that for which it is passed by the Department.”

The report for 1900 states:  “H.M. Inspector reports that the first Standard has been habitually too large since last May (small print of Art 73). The accommodation for the Infants is at present insufficient for the average attendance. This should be at once remedied or the grant next year will be endangered (art 85a).”

until by the HMI report of December 1913:  “The accommodation is for 160 elder children and 44 Infants, the present number on the books is 206 elder children and 52 Infants. Some crowding is inevitable till the new school is completed, but the new building is urgently necessary, and should be finished as soon as possible.”

By the following February:  “On Friday afternoon the school closed for the purpose of re-arranging the school owing to one class being moved into Cowbridge Hall to relieve the over crowding.”

Unfortunately this relief was more temporary than expected as the Hall was often requisitioned by the military, sometimes for a morning, sometimes for a day or even a week.  Eventually, in November the school abandoned the hall. Also in November:  “On Tuesday (17th) the school closed all day owing to its being necessary as to the floors being so dirty as the N & S Staffordshire Territorials passing through the town commandeered the school on Monday night for sleeping in and the school was left unfit.”