On the 6th day of April, being old Lady day in the year of our Lord 1883 The Committee again met in the Rectory and there were present The Rev. J.C.M. Mansel-Pleydell the Rector   The Rev W Wigram Rural dean   Mr C E Longmore Church warden  &  Mr Gerrard Gosselin the Secretary.
The following are the minutes of the proceedings of the Committee; the Rector being in the Chair.
1.|| The Secretary with no small degree of vexation found that the valuable minutes of the last Committee meeting were by his carelessness left safe at Bengeo Hall; the Rector hauled him over the coals promptly 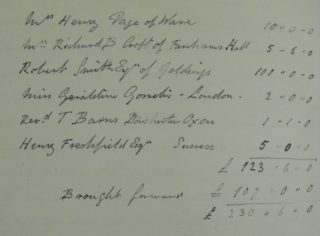 2|| The Chairman announced that subscriptions to the amount of £123”6”0 since the last Committee meeting had been paid in, of this £100”0”0 had been most liberally subscribed by Mr Robt Smith of Goldings – see list on page opposite.1 The total in hand now amounts to ≈ £230. The treasurer’s financial statement cheered up the committee most effectually.
3|| The Committee then being in this happy state of mind examined the various prints and drawings of the old Church which had been sent either as gifts or for their examination in answer to their advertisements in the local press
these they duly advised – they were
a print of Church dated 1803 by N.E. Carn????? given by Mr Andrews builder Hertford
a pencil drawing of said print, sent by one, Mrs B Raves a builders wife of Welwyn (lent) – a very good copy
a water colour drawing of SE corner of church copied from baron Dimsdale’s valuable collection of sketches in Herts copied and sent by Miss Dimsdale – also by the same a drawing of the old font, which old font was of stone & was removed by a former vicar & broken up by a former builder of the parish who died miserably. The stone font was replaced by a neat, light, handy arrangement in wood & lead somewhat resembling a washand stand, this, when wanted for use was planted in the centre of the Goldings pew – it is still in existence at the licensed chapel at Tonwell & is found very handy.
4|| N.B. The Rector found fault with the spelling of the Secretary with regard to the word “extasy” which occurred in the agenda paper. The secretary having found that Johnson agrees with him is, as that worthy explains the word “overcome with joy”2
5|| Proposed by the Secretary that Mr Sheffield should be thanked for not having allowed the font legs & a carved bracket of the Landian Table of the old Church to be burnt – he having carefully preserved these curious relics as an ornament for his fencing3 (not carried)
6|| Mr Mickelthwaites report as to the treatment of the vaults of the church was considered. He advises that the vaults should be filled with sifted earth & the tops then lowered and all brought to a level with 6 inches of concrete. A telegram from Albert Hartshome was put in by the Secretary – saying he agrees with proposed treatment. The Committee had read to them a letter from Mr Mickelthwaite of the 4th April, in which he says referring to the vaults “What is required is to prevent any of the emanations from the decaying matter getting into the Church. – With open vaults & lead coffins we can never be certain that the mischief is past. It may come 2 centuries or more after the burial”  In the main letter he proposes that the floor of the chancel shall be brought back to its ancient level . Mr Wigram agreed that it was most necessary that this work should be done, relating a few of his experiences vaultwise; so did the Secretary. The Committee did unanimously agree on this point & the Secretary was asked to carry out the work, and also it was agreed that Capt John Parker R N might as well give the sand & gravel for the concrete floor – the Secretary was instructed to write to him & ask for it.
7|| Lastly the Committee taking into consideration this happy state of their financial department determined that it was time that Mr Mickelthwaite should get out the working plan & specification of the roof; the Secretary was instructed to inform him of this.
‘                                                                                   J.C.M. Mansel-Pleydell
‘                                                                                             Chairman
__________________ at 5 .15 p.m.

3 These legs & a carved bracket belonging to the table are in the possession of the Committee having been kindly presented by Mr Sheffield.