You are here: Home>Towns & Villages>Bengeo>People>The Gosselins of Bengeo Hall>Chapter 3: Grandson of the Admiral: GERARD GOSSELIN 1855-1946 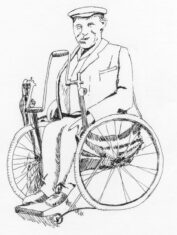 The year 1892 had a horrible start for the nephew of the Miss Gosselins, Gerard, who was now 37. His mother Frances had died in January and both his aunts, with whom he had lived at Bengeo Hall, died in quick succession in the February. The three deaths were all attributable to the ‘flu epidemic.

There was one grain of comfort for him, however. The funerals of his two aunts had taken place at St. Leonard’s Church where they had been baptized and where their grandfather, father and brother were buried.  If it had not been for Gerard’s own efforts, a few years previously, to save the church from total ruin, it would not have been possible to hold the services there.

Gerard was an interesting man and true to Gosselin tradition had energy and drive to get things done. First of all, he had had to learn to live with a serious handicap. He could not walk and had to get around in a “tricycle” as his mother called it. As a child, he had had a nasty fall from a window at Bengeo Hall. A year after this accident, he had been paralysed by Rheumatic Fever. The two misfortunes had crippled him: there was nothing that the doctors of the day could do.  Unlike his brothers, who all went to Eton, and who took up professional careers, he could not go away to school but instead received education from private tutors and afterwards lived as,” a gentleman on his own means.”

He did not share his mother’s enthusiasm for travelling abroad but seems to have spent most of his time at Bengeo Hall and at his mother’s house in Kensington. He was very keen on what would today be called Craft, Design and Technology and he had a workshop at Bengeo Hall where he made such things as pneumatic bellows, bells, a lifejacket made of cork etc.

He was also very interested in the practicalities of building and gave his mother assistance with the supervision of the building of the new mansion on the Blakesware Estate at Widford. He was very concerned by the dilapidated and ruined state of St. Leonard’s Church which is just a short distance from Bengeo Hall.

Throughout the Victorian period, England was becoming more prosperous. The population increased and new houses were needed. This was certainly the case in Bengeo. In 1833, there was a population of 855, by 1854 there were 1,520 inhabitants. It had been decided that a new church was necessary, as the little old church could not possibly cater for the growing number of parishioners. Holy Trinity, a spacious Victorian Gothic building was consecrated in 1855.  The 90 year old Admiral had been present at the dedication service.

About 20 years later the Rector, the Rev. George Thornton wrote in some perplexity to the Diocesan officials in Rochester, (The St. Albans Diocese had not yet been established) asking them to clarify what was intended to happen to what was now known as, Bengeo Old Church. (The villagers were quite clear about what was supposed to happen and were, meanwhile stripping the building and the surrounding grounds for anything that might be useful to them.) The reply he received was that the church could be pulled down or that it could be used as a chapel of ease. Mr. Thornton seems to have let the matter rest for a few years. Then in 1879, he formed a committee (which included Miss Charlotte Gosselin) and did some fund-raising. The building was obviously at risk of total ruin from the weather, wandering livestock and the local vandals. The committee carried out some basic necessary work:

· They put a lock on the door to keep out marauders.

· They put a fence round the churchyard to keep out the livestock.

· They glazed the windows to keep out the elements.

Nothing further was done for 3 years.  There was, now, a new Rector, the Rev. John Mansell-Playdell. He and the churchwardens and Gerard, (who was 28) decided to form a committee, which would undertake the restoration of the ancient church.

Gerard was the secretary of the Committee. The minutes book of the meetings was written by him and underpinned with knowledge and humour. He had been tutored well, his handwriting is excellent and his style of language is elegant. Throughout, the reader senses that it was his enthusiasm (and money) that drove the project forward.

Gerard could live in Kensington, at his mother’s house, whenever he chose and had, therefore, the opportunity to meet interesting and well-informed professional people. He employed a Westminster architect, Mr. Micklethwaite, who specialized in ancient buildings, to come down to Bengeo. Mr. Micklethwaite was most enthusiastic about  St. Leonard’s Church ( Bengeo Old Church). He declared it to be more important in an architectural sense than the Abbey at St. Albans. (This pronouncement greatly pleased Gerard.)

The committee used the architect’s subsequent report as a working document on which to proceed. The aim was to preserve the outer structure of the building and to keep the restoration as authentic as possible.

They sent out letters and photographs of the shell of the building and asked for donations. (They put the powerful and famous Lord Salisbury of Hatfield House at the top of their list: unfortunately they did not get anything from him.)

They raised what money they could themselves. Gerard and his aunts, Mary and Charlotte, made generous contributions to the fund.  Most of the work was carried out by Ekins a local builder. His men filled in the vaults, laid a new floor, put up new fences and gates, worked on the roof (in order to keep out the bats and the birds) and put in new drains.

Gerard keenly enjoyed supervising and overseeing the work. He already knew and learned a lot more, (as the work progressed,) about the technicalities of building: types of joists and arches; types of materials to use; the problems of damp and the importance of drains and soil types. He was helped in practical ways by Captain Parker of Ware Park who provided cement and gravel and by Mr. Palmer1, the churchwarden, who farmed from Revels Hall and who provided water, men and transport. Both these men were on the restoration committee.

The work was carried out every summer over a period of six years. The interest of some of the committee members tailed off but Gerard’s enthusiasm and determination was unflagging.

By 1889, they had made the building safe and sound. There must have been a great sense of achievement, which was largely, his own. He does, however, express a certain ironic regret that the project has not met with more general support.

“I need only add that the church is certainly stronger and dryer than when the committee took it in hand in 1883 but I must say I wish subscriptions were more handy at coming in, but perhaps if they were we might do our work too quickly.”

There was no need for regrets: he had saved the building for future generations to use. 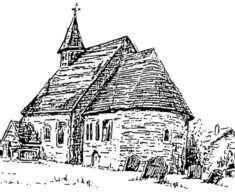 Over the years there have had to be other building programmes for St Leonard’s Church. One was in 1926. By this time, Gerard had moved from Bengeo Hall and now lived in Norfolk at Hindringham Hall (a beautiful, moated Tudor mansion). He had bought the dilapidated property in 1900 and had had it carefully restored, carrying out much of the work himself. People from Bengeo wrote to him for help. He was now 71. His reply was full of sensible advice:

“ You must have an architect and builders you can trust.”

“ Do not change the stone floor to wood (although it causes chilblains) as stone does not rot like wood”.

“ Have water-filled radiators as stoves can cause lots of problems and are expensive to run.”

“Be careful not to let the bats or sparrows in!” (He can remember exactly where the points of entry might be!)

During the course of his 7 page, foolscap, detailed and closely handwritten letter he says:

“ I hope I shall not weary you but when I take up a job, I must try my best to see it through!”

This comment on his own character could also have been made with truth, by his grandfather Thomas and by his aunts Mary and Charlotte.

A service was held at St Leonard’s in thanksgiving for the Preservation of the Church from an enemy air-raid, which had done damage to neighbouring houses and slight damage to the church.  Fortunately no-one had been hurt. The church was packed and a large number stood outside. Among them must have been some of the older parishioners who had been brought up with stories of The Admiral, and who would have known Miss Mary and Miss Charlotte and Mr. Gerard. Maybe, in a reflective mood, as they stood in the churchyard, some also gave thanks for the lives of:

The Gosselins of Bengeo Hall.