Chapter 2: The Daughters of the Admiral

Miss Mary Gosselin (1814-1892)
Miss Charlotte Gosselin (1815-1892)
Bengeo Hall was an ideal location for the new family of the Hadsley Gosselins. The house is spacious and pleasant, suitable for the family of a lady and gentleman of wealth but not over-grand and it is situated within easy travelling distance of Ware Priory, the home of  Sarah’s mother (a widow) and her younger sister.

The Captain (who had not then reached the rank of admiral) and Mrs. Hadsley Gosselin had four children: Emma born in 1811; Martin born in 1813. (In that same year their Grandfather, Joshua Gosselin1 died while visiting the family at Bengeo Hall. He is buried in St Leonard’s Churchyard). There were two more children, Mary born in 1814 and Charlotte born in 1815.  Sadly, their mother Sarah died in that same year.

The Admiral became a magistrate and presumably went to London from time to time; maybe on business and to meet former colleagues to discuss “ the old days”.  One can imagine that some of these ex- naval men came to stay at Bengeo Hall with their families.

Emma, the eldest daughter, married Captain Trower and settled locally at Stansteadbury, Stanstead Abbots (where some of her descendants live today). Martin, the only son, married Frances, the daughter of Admiral Marshall. On the death of his late mother’s sister he and his wife settled at Ware Priory. At home, in Bengeo Hall, (which along with The Warren and The Lodge House had been bought from the Byde family), the Admiral had the company of his two younger daughters. 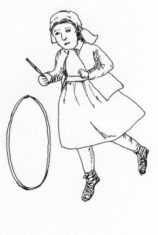 Mary and Charlotte seem to have inherited their father’s energy and sense of purpose. Their joint mission was to improve the social conditions of the ordinary folk who lived around them in the Bengeo Parish.

The expansion of trade and industry in England in the C18th and the C19th had given the chance for many businessmen to become extremely rich. The new system of agriculture, which did away with   peasant style farming, had also increased the wealth of the landowners.  Some shopkeepers, tradesmen and professional people also gained from the increasing prosperity of the country. However, the circumstances of the ordinary workers were dire. Farm ”hands”: factory ”hands”, the words sum up the attitude in which the workers were regarded: simply in terms of their manual functions.

One way of dealing with the miserable plight of the workers: the poor housing; hungry, dirty people; ill, ragged children; drunken, violent, promiscuous adults; was to simply ignore it. Robert Abel Smith of Waterford, (which was part of the Parish of Bengeo,) often told his wife: “ how when as a child he drove through it with his Mother on the way to Hertford, she always drew the blinds, so that he should not look on wicked Waterford.” (This would have been during the 1840’s.)

However, he and other like-minded people were determined to improve the village and its inhabitants.

Mary and Charlotte Gosselin were determined do the same in Bengeo itself. It is recorded that they both visited the poor and helped them with their money and their kindness. Both ladies were described as,“ angels of mercy”. They both taught on a regular basis in the Sunday Schools. They were always ready to support the organizations in the district that were set up to promote the well being of the residents. Miss Gosselin regularly sent contributions to the Port Vale Soup Kitchen. They were involved in the establishment of the Bengeo Working Men’s Club, which was set up to give the labourers opportunities for positive social pursuits rather than drink themselves to a stupor in the pubs.

They both gave money for building work and improvements to the new churches of Holy Trinity and Christchurch. Miss Gosselin (we do not know which one) paid for the side windows in the chancel at Holy Trinity. The windows were commissioned in 1860 from Powells of Whitefriars in London. Both ladies gave generously to the funds which were needed in the 1880’s for the restoration work of St. Leonard’s Church. 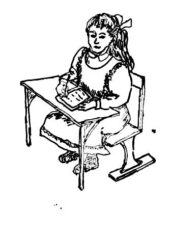 When the National Boys’ and Girls’ Schools were set up in Bengeo2, each lady took her duty as a manager very seriously.  From the school logbooks of the time, it is clear that the sisters visited the schools on a weekly basis. (Unfortunately, it is not clear as to which sister did what as they are usually referred to simply as Miss Gosselin.)

Certainly the records show that, as a rule, the ladies came to the school at least once a week.  Their visits were not simply of a formal nature when everyone was expected to be on their good behaviour.  They each gave weekly lessons in scripture and reading. The pupils were by no means docile.  The inspectors, in the early days of the schools, thought that the children were very noisy; some had to be caned; some had belligerent fathers who came to complain about the treatment their sons had received; some had to be excluded as their presence could not be tolerated; some were just annoying. Throughout, the Miss Gosselins were involved.

“Miss Gosselin was told that Peter Bunyan has been in mischief and willfully forced several bricks off the school wall.”

“ Miss Gosselin visited the school but as a singing lesson was being taken, she did not stay.” (!)

The head of the Girls’ School was ill:

“The school was carried on by the assistants and assisted by the Rector and Miss C. Gosselin”

It was decided to introduce practical cookery lessons: Miss Gosselin was present at the first series of lessons. Sometimes, there were school treats at Bengeo Hall.

Both ladies must have been really pleased, as the annual reports of the Inspectors became more and more positive. In July 1890, for example, the report reads:

“This is a decidedly good school. The boys are intelligently taught and exhibit commendable interest in their work.”

Through their involvement with the church and the schools they would really have got to know the needs of the people of the parish. For instance, the Boys School ran a clothing club. Miss Mary and Miss Charlotte would know through this kind of initiative who needed help with boots, warm blankets, coats etc.

Of course, these duties of social responsibility were not the only ones for Mary and Charlotte to undertake. They would also have looked after their father. They would have helped him to get over the disappointment at not being automatically made up as Admiral of the Fleet, in 1854. According to seniority, this should have been his appointment (he was 89!). However, tradition was broken and he was overlooked.  Everyone in the family, including the old man himself, was most upset. It seemed like a slur on his whole career. He died in 1857. The words on the tomb in St Leonard’s churchyard read:

“Senior Admiral of Her Majesty’s Navy”

The running of Bengeo Hall itself must have been quite time-consuming for Miss Mary and Miss Charlotte. Census returns show that there were at least 5 servants living-in and there would have been other workers who came in on a daily basis. For example, in 1871, the resident staff comprised butler, cook, housemaid, kitchen-maid, under-gardener and groom. Incidentally, the housemaid, Mary Wilshire stayed with them for at least 20 years. This would seem to indicate that they were reasonable people to work for.

After the death, in 1868, of their brother, Martin, Bengeo Hall became, at times, a second home for their sister-in-law, Frances and their nieces and nephews. (The family had moved out of Ware Priory and rented a house in Kensington. Martin and his wife, Frances, had already bought the estate at Blakesware3 near Widford with the intention of building a new mansion. Sadly, Frances was to continue  the building scheme with the help of her sons.)

According to the fascinating journal kept by Frances, Mary Gosselin was dutiful and conscientious. Frances wrote of her:

This same sister-in-law stated that Charlotte was the more fun- loving woman. She made several trips abroad with Frances and her nieces and nephews. She stayed with Frances in London and the two women went out and about together. Charlotte also seemed to have more time for leisure activities than her ‘dutiful’ sister and she completed several nice water colour paintings of St. Leonard’s Church and its surroundings which are still in the family’s possession.

People in Bengeo were devastated when the two sisters; died within days of one another as a result of a particularly virulent ‘flu epidemic in the winter of 1892.  Mary was 78, Charlotte was 77 years old.  Muffled bells were rung on the day of Charlotte’s       funeral. The sisters were buried in St. Leonard’s Churchyard. The Rector, the Rev. John Mansell-Playdell could only appeal to others to come forward and try to close some of the gaps in the life of Parish that had been created by their deaths:

In the September 1893, two stained glass windows, commissioned from Clayton and Bell , a well known London firm, were placed in the North Wall in Holy Trinity Church. The first window is dedicated to Mary and Charlotte and was paid for by the Parishioners. It depicts The Good Shepherd flanked by Dorcas and Lydia. (Early Christians mentioned in The Acts of the Apostles and both, appropriately, “women of action”.)  The second window is dedicated to all three of the Admiral’s daughters and was paid for by The Trower Family. It shows Faith, Charity and Hope, (Latin is used for the inscriptions: Fides, Caritas, Spes)

At the dedication service, the preacher was the Rev. Philip Deedes.  He, again, spoke about the known and unknown kindnesses of the two sisters and also emphasized the fact that:

“they chose such a quiet place as Bengeo in which to reside, instead of selecting the Metropolis or some other busy city, where they could have gone into society far more than they did and have enjoyed the pleasures of this life had they been so minded.” 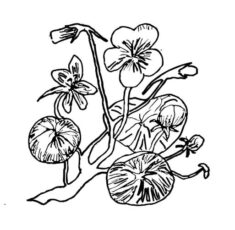 The idea had been to make the occasion a joyful one for the parish and along with the dedication service there was a flower show in the church.  The twentieth annual show of the Bengeo Cottage Gardeners’ Society was also held in a nearby field. (This Society is still very much in existence today!) The organizers were Mr. Palmer, one of the Churchwardens; Mr. Farrow, Hon. Sec. Of the Working Men’s Club and Mr. Ellis, head of the boys’ school. The band of the 1st Herts Volunteers played ” a pleasing selection of music”.  There were also to be a number of “Sport’s Day” type of events. However, the outside events, the prize-giving and the races had to be postponed. It poured with rain! 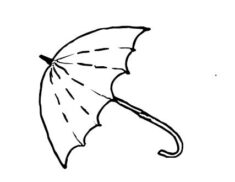 Bengeo had paid tribute to two of its best friends.