Chapter 1: The Admiral of Bengeo Hall

Thomas Le Marchant Gosselin was born in Guernsey in 1765. (Le Marchant was the family name of his mother) The Gosselin family was notable in The Channel Islands and could trace their line beyond that of William the Conqueror: they had been granted their armorial bearings by King Edward III in the C14th.

Thomas was the second son. He could not rely on inherited wealth, he needed to make his own way in the world. It was decided that he should go to sea and take advantage of the good prospects (for an intelligent and confident boy) offered by service as an officer in the Navy of His Majesty King George III.

Throughout the latter part of the C18th, the British Navy was a vital part of the country’s affairs. The businessmen wanted to maintain and expand their successful foreign trade: successful trade meant wealth and wealth brought power. A strong navy was vital in order to keep the trade routes safe for British merchant ships. The navy was also vital for those politicians who were determined that Britannia should “Rule the Waves”, even if this meant expensive and protracted wars against other ambitious European nations, particularly France.

At the age of 13, young Thomas Gosselin was taken on board as a trainee officer by Captain Boteler in the frigate “The Actaeon”. (There would have been about 250-300 people working on board.) His belongings would have been packed up in his sea chest which was made of canvas covered pine and banded with iron. It was designed to be transported with its owner from ship to ship throughout his career. 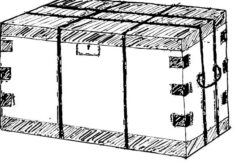 The way to learn how to become a ship’s officer was by being ‘on the job’. He would have already received a good basic education from a private tutor. At sea, the ship’s schoolmaster or an officer would teach him navigation, astronomy and trigonometry. He would be expected to keep his own logs and a journal of the ship’s progress. His life, like that of his fellow seamen would have been governed by the ship’s bell which was rung every half hour so that at eight bells it was time for the four hour watch to change. In order to learn the practicalities of life in the Royal Navy, he would have had to undertake four hour watches on deck by night and day and literally “learn the ropes” as he set sails, tied secure knots and helped to haul in anchors.

According to the system of promotion at that time, in order to qualify as a Lieutenant a young man had to be presented before a board of 3 senior captains for an oral question and answer exam. The board would then scrutinize his logs and journals.

The candidate also had to present his certificates, which were signed by the captains he had served under to prove that he had had at least 6 years experience at sea.

To succeed, Thomas needed the right family connections; the opportunities to work for an up and coming officer; aptitude, ability and luck. Luck to be in the right place at the right time and luck to escape the life threatening risks of the diseases and dangers1 that were all part of life at sea in those times.

By the time he was 22, Thomas was making a success of his chosen career. He had come to the attention of the future Admiral Cornwallis and was in continuous service with him until 1802. He became a wealthy man. In addition to his salary, he was given valuable presents by the merchants whose ships he protected when assigned to escorting convoys. For example: he was given a valuable sword by the masters of the merchants’ ships when he was on patrol in the Leeward Islands in 1798.

He would also have been awarded prize money2 for the capture of enemy ships. For example: he and Cornwallis captured a small French convoy in 1794, when they were on blockade duty along the West Coast of France. According to the naval practice of the times, he would have been legally entitled to a share of the value of the cargo and of the ships themselves.

By 1800, Captain Thomas Gosselin was considered sufficiently note worthy and wealthy to be placed in attendance on George III and other members of the Royal Family when they were residing at Weymouth. His parents back in Guernsey must have been really proud of their son’s success.

From 1802-1804,he was on shore leave. This was the time of the Peace of Amiens that had been agreed with Napoleon. However, everyone knew that both sides were playing for time: time to regroup and recharge themselves for yet another war.

Bath was the favourite and fashionable resort of the day and many of the new breed of wealthy naval men on leave liked to spend some time there. It is quite possible that it was in Bath that the successful Captain Gosselin was first introduced to the wealthy heiress Miss Sarah Hadsley of Ware. Maybe it was here that they came to an understanding that once the impending war was over, they would marry. (As in fact they did in 1809.)

By 1804, it was quite clear that Napoleon intended to invade England. The strength and expertise of the Royal Navy was to prevent him carrying out his ambitious plans. The first plan of action was to blockade the major ports to prevent the French ships setting sail to carry the invading troops. Nelson was on duty at Toulon in the Mediterranean. Cornwallis was on duty on the Channel Coast of France. Captain Gosselin was with Cornwallis. The work was difficult and dangerous and the seamen really had to know the intricacies of the tides and the currents. However, Captain Gosselin and his crew stuck to their task and he later received an official commendation for his success at Brest where he and the other ships in his command had closed down the French attack.

As a result of this, he was promoted from a frigate to a ship of the line, “The Audacious”. His family must have been really impressed. They seemed to have had some financial difficulties at the time. There is a letter from Thomas to his father, Joshua, in which he reassures him:

“When peace comes, I shall look out for some habitation where we may all meet” and “ I trust you will believe I speak from the dictates of my heart when I say whatever money I possess is perfectly at your command.”

His next mission was to go in pursuit of Jerome Bonaparte (brother of Emperor Napoleon) whose fleet was in the West Indies.

However this did not turn out well. Firstly, they lost the French Fleet and secondly, they were caught in a dreadful hurricane. An eyewitness on another ship wrote that despite the storm the sea was calm because the rain was so heavy.

“ No sail could be set, so we lay entirely at the mercy of the waves…we saw “The Audacious” totally dismasted.”

This same eyewitness was amazed to find later that the “Audacious” had got back to Plymouth:

“we again fell in with the poor “Audacious” who we found suffered considerably that night, her foremast fell overboard, her foreyard went through the decks, her boats were destroyed excepting one…she had remained a perfect wreck for five days.”

“The Audacious” was refitted and Captain Gosselin’s subsequent duties were troop carrying. These duties would have been an expensive undertaking for him personally, as it was expected that the Captain of the leading ship would provide generous hospitality for the army generals and officers aboard. Evidently, by now he could afford to entertain in style. In 1809, he had to transport the remains of the defeated army of Sir John Moore from Corunna (La Coruna in Nth West Spain) back to England. This disembarkation was carried out with great expertise: “The Audacious” and the other accompanying ships sailed to Corunna in record time where the desperate soldiers thankfully climbed aboard having had to hastily bury the body of their general, the brave Sir John Moore, who had been killed in action. Captain Gosselin received “the public thanks of both Houses of Parliament” for his “unremitting exertions” during the disembarkation. (To this day, his descendants cannot understand why he was not given the knighthood, which he fully deserved.)

In March he married Miss Sarah Hadsley of Ware Priory. The wedding must have been a grand occasion, conducted by the Archbishop of York at St James in London. The groom was 44 the bride was 33.

Later in the same month, Captain Gosselin retired on half pay: (the reason was given as ill health).

Early on in their married life Thomas and Sarah came to live at Bengeo Hall on the outskirts of Hertford near the old church of St. Leonards.

To ordinary Bengeo people, the new occupant of Bengeo Hall must have seemed quite strange: he would have been exceedingly tanned and lined after all his years at sea; he would have spoken a mixture of French and English interspersed with naval jargon; he would have walked with the traditional naval roll. He would have been quite different from the local country gentleman of the time.

To those who knew the outline of his career3, he would have been someone to admire and respect (apart from his wealth). They would have known that he was a man of exceptional qualities: physically tough; an expert seaman; a capable leader whether in the heat of battle, in the caution of the blockade, or in the disaster of the hurricane; a responsible commander of between 600 and 700 men (the complement on board “The Audacious” which was a 3rd rate battle ship). 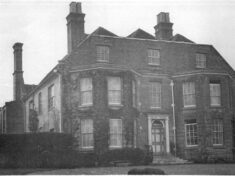 Bengeo had acquired an interesting inhabitant!

FATAL CASUALTIES IN THE ROYAL NAVY IN 1810

2.    Appointment to a well-known prize money command could mean an almost automatic fortune.

In 1708 the British government enacted the “Cruizer and Convoys Act”.  One of its effects was to formalize the process of prize taking, giving practically all the money gained from the capture of enemy vessels to the captors ’for the better and more effectual encouragement of the Sea Service’.  Every prize appeared before the High Court of Admiralty for ’condemnation’.  It laid down exact regulations for dividing the proceeds among the various interested parties.  The Act was altered in 1808 changing the distribution of prize money.