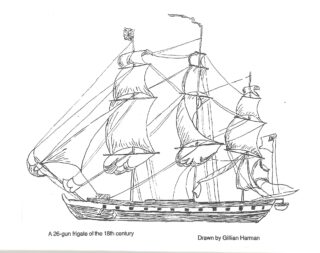 A 20-gun frigate of the 18th century
Gillian Harman

An 18th century midshipman with his sextant
Gillian Harman 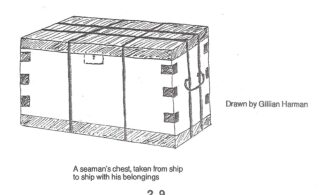 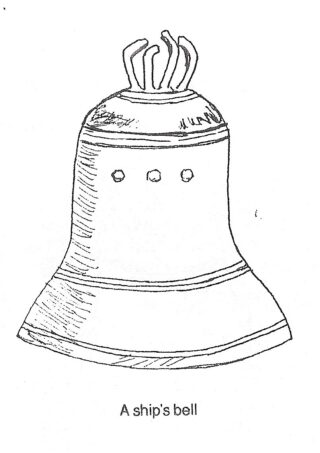 Admiral Gosselin was born in Guernsey in 1765 and died in Bengeo in 1857 at the age of 92. The name is still very much part of life in Bengeo today. We ha.ve Gosselin Road and Gosselin House, which forms some nice sheltered accommodation for our elderly residents. In Holy Trinity Church Bengeo, we have two fine stained glass windows dedicated to the memory of the Admiral’s daughters and in St. Leonard’s Bengeo, we have the hatchments of the Admiral and his wife, Sara Hadsley of Ware Priory.

Captain Gosselin (as he was then) and Sara married in 1809 at St. James in London. The service was conducted by the Archbishop of York. He was 44, a successful and wealthy man, she was 33 and the heiress of Ware Priory arid surrounding estates. There is no record (that I have found) that tells how and where they met. The couple set up home in Bengeo Hall which they rented from the Byde family. (Later on, the Admiral bought the Hall and the Warren and Lodge House on Port Hill from the Byde Estate.) There were four children. Emma, who married into the Trower family of Stansteadbury, Martin who married and lived at Ware Priory, Mary and Charlotte. Their Mother died in 1815 when they were all very young.

The Admiral’s career had been remarkable. As a second son, he had had to make his own way in the world and had joined the navy of King George III at the age of 13. He was at the battle of the Saintes (in the West Indies) in 1782 and had come to the notice of the future Admiral William Cornwallis (brother of Charles who had surrendered Yorktown) who was to become his patron in the ensuing years of his career. He was promoted to lieutenant with, the then, Corr1modore Cornwallis in 1787 when he saw service in the East Indies.

His first command was the Brunswick, a heavy old ship of the line. In 1795, he became captain of a frigate, The Diamond (28 guns). To become a captain was a significant step as this meant that as Senior commanders died he would automatically be moved up the promotion list. To be the captain of a Frigate was a major turning point in his career. It meant that he was in a good position to make money by taking prizes and by receiving gifts from wealthy traders. Frigates were fast and manoeuvrable. They were used in escort duty to protect convoys and they could give chase to enemy ships (usually French) and capture cargo and the ships themselves.

In 1804, the Captain’s duties changed and he was on blockade duty on the French Atlantic Coast, where English ships under the command of the , now, Admiral Cornwallis, were frustrating Napoleon’s invasion plans. The work was considered difficult and dangerous and required a high level of seamanship, which he and his crew had obviously attained. In 1806, he was given his own ship of the line the Audacious. The last missions of his career involved conveying troops and he distinguished himself by his skilful cover given to the English troops at Corunna in 1809, as utterly wretched, defeated and leaderless they climbed aboard the waiting ships to be taken back to England. For this successful service, he was given public thanks by both Houses of Parliament for his ‘unremitting exertions’: to this day his family cannot understand why he was not given the knighthood which he deserved.

At this point, there are various aspects of his life that are not clear to understand. The disembarkation had been carried out in January 1809, and the following March he married Miss Sarah Hadsley. Later in the same month he retired on half pay, (the reason given was ill health). Was their romance a whirlwind affair? Were the wedding preparations completed in a few weeks? Was he really ill? Had he been in some disagreement with the navy or in some political spat? I suppose we will never know. Certainly one can see the sense of the couple living at Bengeo Hall, as they were very near Sarah’s mother and father. But surely the Captain would have missed the sea and the active life of the navy? Life in Bengeo must have seemed very dull by comparison. After all, on the Audacious he would have been in command of between 600 and 700 men.

His wife died after only 6 years of marriage. Gradually, the Captain, in retirement, was promoted through the system. By 1854 he was Senior Admiral of the Red (Squadron of the British Fleet). The vacancy now occurred for Admiral of the Fleet: according to tradition this honour should have been given to Bengeo’s Admiral. However, he was overlooked and the tradition was broken. (It had been broken once before, but in that case, it was to make way for royalty, for William, Duke of Clarence, who enjoyed his naval service of 11 years and who counted Nelson amongst his dearest friends.. The old Admiral and his family were most upset by this omission. Letters were written, he and his son went to the Admiralty in London; ‘The Times ‘ took up his cause. All was in vain. Admiral Gosselin died in 1857 and his coffin was borne by his son and son in- law at a simple private service at St. Leonard’s Church. The tomb, which is also for his father, Joshua; his wife, Sara; his son, Martin; and a baby grandchild, is in the churchyard outside the North Wall of the Church. The inscription reads for Thomas:

Senior Admiral of Her Majesty’s Navy”

Bibliography: the Journal of Frances Marshall Gosselin: a family MS kindly lent by Mr. Michael Maslinski; O’Byrne’s Naval Biography: from the Library of the Society of Genealogists, London.