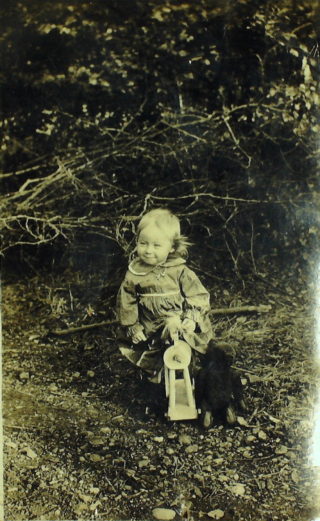 Rene as a youngster 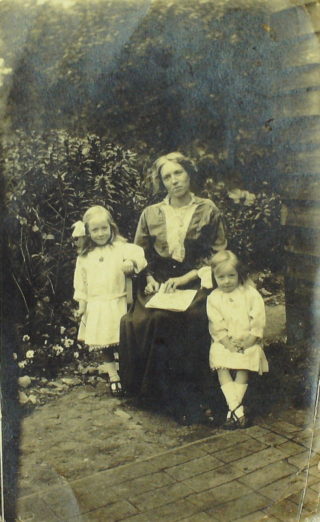 Rene, right, with her mother and older sister? 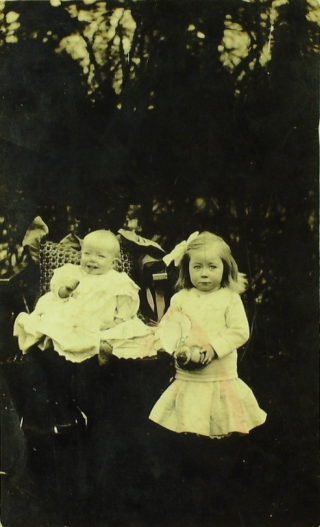 Rene with a younger sister?

Rene as a baby with her mother? 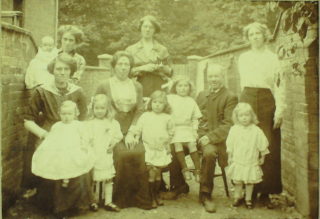 Family photograph with Rene on right and her father sat next to her? 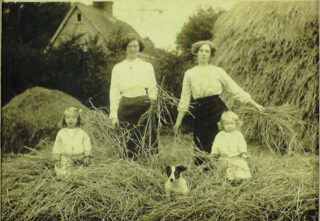 Rene on right with her sister, mother and ? 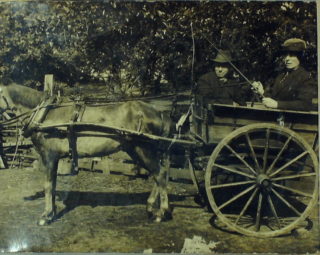 Rene's father with a friend?

Born at Morley Ponds Cottages, Wareside, Margaret went to school in Wareside and then to the original St. Mary’s School in Ware. I believe she came to live in Ware when she was about 10 and her Father was the live-in park-keeper at the Priory for some years. He was apparently very strict and would often clip “naughty boys” round the ear for treading on the grass etc. He grew grapes in the conservatory(that used to be at the back of the Priory) which were still growing there until the new conservatory was built.

Margaret was known to most people as Rene and as far as she was concerned the Priory was never the same after her father stopped looking after it. Their accommodation I believe was at the front of the building upstairs on the right hand side. She then lived with her parents in Presdales Drive until she married Alf Pipkin.

Alf was a very nice inoffensive man and was a talented cabinet maker, he worked for Hitches for part of his working life and trained apprentices. He enjoyed football and I seem to remember being told he played for Ware Town until his marriage or until his son was born. They bought their house in Milton Road when they got married and lived there for the rest of their lives. When Rene died she had been living in the same house for about 75 years. Alf died in 1989. She often used to tell me of the changes she had seen in Milton Road.

Rene started work at 14 making tea and learning the trade of haberdashery and although she started as a general shop assistant she rose to running the curtaining and haberdashery department in Ingles and Harradences. Even in her later years she could be found during the afternoons at her sewing machine either making curtains for people of making peg bags and aprons to be sold in Hart’s of Hertford which has only recently closed.

Rene also made things to be sold at her sister’s church to raise funds. She was a very strong character and enjoyed a good debate, was never frightened to air her views and didn’t deviate from them.

She would often write to MP’s about various grievances and was very proud of the amount of letters she received back from the House of Commons.

She had three parties at the Priory for her friends and neighbours that helped her on her 90th,95th and 100th birthdays. The Mayor came and presented her with flowers on her 100th.

Rene still had a few friends that she knew from schooldays amazingly and kept in touch with many aquaintances by post or telephone.

She spent the last few months of her life in Hillview Nursing home with the intention of returning one day to her beloved Milton Road house  – unfortunately this was not to be and she died in hospital after a short illness.

Rene used to tell me about dances that she had been to at the Drill Hall when she was young and tea parties at church, although not a churchgoer herself. She had kept many momentoes and had lots of albums full of old programmes from various local events. She had two lovely watercolours of the Priory painted before the war when there was still a canon outside the front entrance. One of her grandsons told me he would donate them to the Priory when  she died.

Rene would often tell me how, when she first moved to Milton Road, the cows would wander down from the cow fields at the top of what is now Kingshill and occasionally come through Big Horse Lane which used to run at the bottom of our gardens. This land was eventually taken into the gardens of  Milton Road but Mrs Pipkin always referred to this area of her garden as the lane and left it just as it always had been.

Alf and Rene took in a couple of Irish evacuees during the war.

They had one son, Denis, who was in the services and he eventually married and lived in Glasgow. Denis and his wife Irene had 2 sons and sometimes would come and stay with her for a week. Rene also had 3 or 4 great grandchildren. She flew to Scotland to stay with them sometimes for a holiday and I belive she was in her eighties when she had a hip repllcement there. The last time she flew to Scotland I think she was about 95.

Unfortunately both her son and her daughter-in-law had terminal cancer and her daughter-in-law died 3 weeks before she did. Her son and his two sons were coming to arrange Mrs Pipkin’s funeral after she died but tragically her son died on the morning they were due to come. Her grandsons came and arranged Irene’s cremation in Stevenage. A seat in memory of her stands in the grounds at the back of the Priory.