You are here: Home>People>George Paul: A Life in Hertford>2. Rationing and Poaching

A wartime family in Hertford 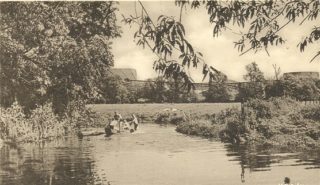 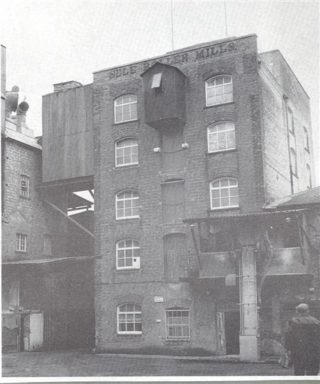 My father decided he was going to Breed Rabbits for the Table, as War was imminent and Rationing was forecast, so he purchased a breeding pair of Flemish Giant Rabbits from the old Poultry Market (which is now, I believe, the Fire Station) and then started to construct Hutches for around 20 pairs. My job was to go out into the fields and Hedgerows to collect sandbags full of Dandelions and Cow Parsley etc, as we needed at least two sacks full a week to subsidise their food stocks. (I remember we were always careful to close the gates of fields which we visited). Before long, with breeding, we had 100 Rabbits, and not only killed and ate them ourselves, but also sold some to buy stock for Dads new venture, Laying Hens.

For this he purchased Rhode Island Reds and Plymouth Rocks, which then gave us a regular supply of Eggs for the Table, as well as putting many down into Buckets of Water Glass, which kept them for many weeks, as in those times only the wealthier people could afford Fridges. All Council Houses had Pantries, equipped with a cold Slab like Marble, and this Pantry was usually situated in the coldest part of the House, as ours was, and as most shopping was done on a weekly basis, this was sufficient. With Rationing, all the Ration Books Coupons allowing you to buy certain foods, such as Meat, Bread, butter, margarines etc, and even Sweets, were for weekly use and not usable in advance.

Also, central heating was almost non-existent, and Coal fires were the order of the day, with Coppers used not only for heating water for the Baths, but also were used for the Washing. In my home, the Copper stick for stirring the washing was the item used to threaten us kids with if we misbehaved, although never utilised for that punishment.

At the foot of Sele Hill was Sele Flour Mill, through which the River Bean flowed. It was used to power the Water wheel below the road Bridge into the Mill, and the owner, Mr Garret, allowed us to fish for the trout therein quite often. We found that the Millworms hiding under flour Sacks would Hook them every time, but kept this secret from him, as he would often offer us a Shilling each for any nice Heavy one over a Pound in weight.

As I got a little older, I used to wander all over the Fields around the Area, learning as much as I could about Country Life and ways etc. I was taught how to Poach Rabbits and Pheasants, Partridges and Hares etc by a Romany Gypsy who took a shine to me and lived in a real old Gypsy Caravan up in the fields where Sele Farm now stands. He taught me many country skills, such as how to keep and  use Ferrets, and how to get a Rabbit out of its Burrow by cutting a long  Blackberry Bramble, then inserting it down the Burrow until you felt it wiggled by a Rabbit, then you twisted it fast so that the Prickles wrapped into the Fur, and then you could pull the Rabbit out on the end of the Bramble for the Pot. NB. Gloves were essential.

He also taught me how to squeal at the Mouth of the Burrow, just as the Weasels do, so that Rabbits would come to the opening of the Burrow and it was then possible to quickly slide down your open Hand onto its Neck and catch it. (Rabbits are always very curious about squealing noises).

At one time I owned two White Ferret Bitches, which I used for catching Rabbits, and also around twenty Rabbit Nets to catch them in as the Ferrets chased them out of the Burrows. One golden rule was always feed the Feretts before using them, or they would kill down the hole and stay there for days, gorging on the dead Rabbit. When this happens, the only course was to block up all holes for three days and then come back and open only one and whistle it out by squeaking!

To place a Rabbit net took a little skill, as it had to be draped over the hole with the surplus netting evenly draped around the hole and just a little extra at the top, for the Rabbits used to shoot out of the Holes at high speed, making the Net tighten into a Ball with the string threaded around the edges pulling tight as the Rabbit shot into it. The outer string was secured into the ground by a wooden Peg, which acted as an Anchor, thereby pulling the net tightly around the Rabbit.

It was quite common that there were around fifteen to twenty holes in each “Head” (another name for Warren, a Rabbit Colony or village). When you recovered your Ferret, it was essential to pick it up from behind its Head on the Neck, or it would try to grab you with its Teeth, and getting it off your Hand could be a Problem. To squeeze the sides of its Jaws was the best way to make it let go!!

We (my best friend  Jack and I) used to go Ferreting every weekend in the local Sandpits and on Railway Banks etc, bringing home on an average four to five Rabbits for the Table for each Family.

The Gypsy also taught me how to set Snares, a type of Brass string made into a Noose, which had to be set in a Rabbit run, ie the path that is used by Rabbits on a regular basis, just like a Human Footpath. You set the noose upright, with the bottom of the loop just a half an inch above the ground and the top steadied by either a small stick or against some bush or Grass, with the end secured by a wooden Peg in the Ground, the major point being “Keep it looking natural“ as your byword. When a rabbit saunters along, its nose is always at ground level or just above it, so it enters the Noose almost every time and cannot release itself,  for the Noose gets behind its long ears and cannot come off. (When you are setting Snares, you must always return within about four Hours, or the Rabbit suffers too much.)  Also, whenever using your Hands to work with these devices, it was always good practice to rub your hands in Rabbits’ Poo to hide the Human Scent.

The other Poaching  skill  was much crueller, for we used to string a fishing line between two bushes, with lines hanging down and Rasins on the Hooks for Pheasants and Partridges to swallow and get hung up ready for collection later!! I gave this practice up quickly, as I thought it was too cruel.

We were also aware that most Wild Game Birds liked to perch at night on Tree Branches overhanging the Roads, as they like the Heat coming up from the Tarmac, and this made it easy to spot them with a good Torch and shoot them down with either a Catapult or Airgun, as long as you did not shine the light too long and get a Jerry plane either to drop a Bomb on you or Machine-gun you.

The reason behind all this Poaching was all Foods like Meats were rationed in the Shops, and any extra meat we could get from other sources was considered fair Game for the Table. Also during the War, as in our household, there were always extra mouths to feed, such as Relatives from London evacuated or Bombed out, owing to the Blitz and Bombing, plus Evacuees, and at one time we had over fifteen Adults and Children living in our three-Bedroomed House, with us Kids sleeping in Beds top to toe, sometimes six to one double Bed!!

I still have a Certificate that my Mother received from Buckingham Palace, thanking her for having so many evacuees in our Home.

My Romany Friend also taught me how to lay on the River bank and place my hand in the water behind a Trout and gently caress its Tummy, moving your hand gently along until you were able to slip your Fingers quickly into its Gills and flip it onto the River Bank – called Tickling Trout. Every Summer in September we used to go Beating for the annual Farmers’ Shoot, and were paid Half a Crown a day for chasing out the Game such as Pheasants, Partridges, Hares and Rabbits for the Guns to Shoot. We always were given one or the other to bring home with us.

I used to earn my pocket money by going to Jewsons Timber Yard in  Hertford with an old wooden Wheelbarrow and buy the Beam Offcuts, take them Home and Chop them into Firewood pieces, bundle them up and sell them to customers I had found around the Town. I could make around eight shillings a week doing this, as well as my Regular Paper Round every Day. My best customer was Mrs Stallabrass, the wife of Stallabrass the Butchers in Hertford.