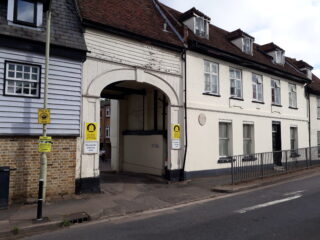 Born in Hertford, William was the son of Benjamin Westall a brewery manager and Martha Harbord, both from Norfolk. He lived together with his step-siblings in West Street in the early part of his childhood.

William showed his artistic talent early on. He was taught by his elder brother, Richard Westall and then enrolled at the Royal Academy in 1799.

At just 19 years old, William was appointed as landscape draughtsman on the Matthew Flinders’ expedition, which made the first circumnavigation of Australia (1801-1803). Improvements in navigation and map-making over the previous 80 years led to European countries backing maritime exploration across the globe. Often these missions brought together diverse researchers. William’s companions included a natural scientist, physician, mineralogist, astronomer and botanical artist.

The expedition set sail in July and by December 1801 the expedition came in sight of Australia’s west coast. William sketched coastal views from on board ship and went ashore to paint the land new to the European understanding.

Leaving Port Jackson (now Sydney), they sailed up the east coast. At Port Bowen, Flinders offered to name the highest mountain to whoever reached the peak first. William won and it was named Mount Westall. The expedition continued through the Great Barrier Reef and the Torres Strait. By this stage William was portraying events and people more than landscapes. Amongst his work are copies of Aboriginal cave paintings, making him the first European to document Aboriginal artwork.

Eventually, the expedition was forced to return to Port Jackson where their ship was deemed unseaworthy. William sailed for England in August 1802, but the vessel was wrecked in the Coral Sea. The crew and passengers were marooned on a sandbank for nearly three weeks before rescue arrived. At this point William left the Flinders expedition and sailed to Canton (now Guangzhou) and on to India arriving in Bombay by April 1803. Following a brief return to England in 1805, William set sail for Madeira and on to Jamaica.

Back in England William worked up his drawings for publication as engravings in Flinders’ account of the voyage in A Voyage to Terra Australis (1814) and in Foreign Scenery (1811) landscapes depicting Madeira, the Cape of Good Hope, China and India. The success of these books led to substantial illustration work for books on English history and landscape.

William became a regular visitor to the Lake District and struck up a friendship with the poets Robert Southey and William Wordsworth. He married Ann Sedgwick of Dent, Cumbria in 1820 and they had 4 sons. Supporting his family now became prime concern and he is said to have complained that his chance of fame was missed in order to earn a steady income through illustration.

Paintings and drawings by William Westall can be seen at the following place: