You are here: Home>New contributions>A Royal Carry On at Hertford

A Royal Carry On at Hertford 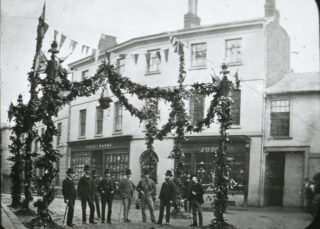 Towns people and decorative arch erected at the western end of Fore Street, in preparation for a visit from Edward, Prince of Wales, 1874 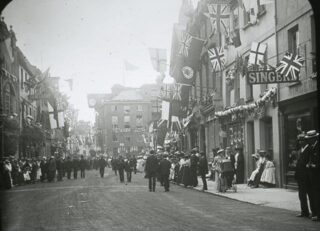 Crowds awaiting the visit of the Prince & Princess of Wales to Hertford, 1874

Hertford doesn’t often have Royal visits, at least not since medieval times when the castle was still a base for the monarch. Early in her reign Queen Victoria came twice with her husband Albert but it was not until 1874 that her son and daughter-in-law, the Prince and Princess of Wales visited. The Hertfordshire Mercury brought out a special edition days after to cover the event.

At the end of November 1874, the Royal couple had been staying with the Earl and Countess Cowper at Panshanger. Travelling back to Sandringham by train from the Great Eastern Railway station (now Hertford East) they passed along North Road, St Andrew’s Street, Fore Street and Villiers Street. The town Corporation and inhabitants took the opportunity to decorate homes, shops and businesses along the route. The Mercury reporter was impressed by the evergreen and floral arches, trophies of flags and festoons of gold cords and tassels. He described the pictured decoration outside the Stephen Austin offices as “an imposing canopied avenue formed of evergreens, festooned sexagonally, and supported by columns of evergreens.” In Fore Street, the 1st Herts Battalion of Volunteers band played to entertain the crowds.

A great burst of cheering announced the arrival of the Royal visitors into Fore Street. The reporter described “as you look down the street, canopied with flags and crowded in every part with eager spectators, [the scene] was exceedingly animated and picturesque.”

On a platform in front of the Corn Exchange, the Mayor, the Town Clerk, the parish clergy, the members of the Corporation and other officials were assembled in their ceremonial robes. The Address was ready to present to the Prince. Unfortunately the Royal carriage failed to stop in time, passing the platform by some fifteen yards. Quick to keep the show on the road, the officials gathered up their robes, climbed down from the platform and hurried along to catch up to the Royal carriage.

His Royal Highness finally received the Address from the Mayor and the Mayor’s wife presented the Princess of Wales with a boutique of roses. After a lot of handshaking, the cortege moved off towards the railway station with the band playing “God bless the Prince of Wales”.

As they reached the Bluecoat School (Christ’s Hospital) four hundred boys stationed on a platform at the gates received them with cheers, which continued until the Royal carriage had passed the limits of the school buildings, when they sang “God Save the Queen”.

At the station the Royal couple were received by the Chief Superintendent of the Railway Company (Mr J Robertson) and station master Mr Boatwright. The Prince and Princess boarded the train and stood by the windows to acknowledge the crowds which had followed them. They left punctually to the strains of the National Anthem played by the Herts Volunteers.

The following day a violent storm carried away many of the decorations, so that by Monday evening everything had been taken down and “the old town resumed its customary appearance”.