You are here: Home>Groups>Hertford Oral History Group>Maggie Beaton interviewed on 9th May 2001

Maggie Beaton interviewed on 9th May 2001 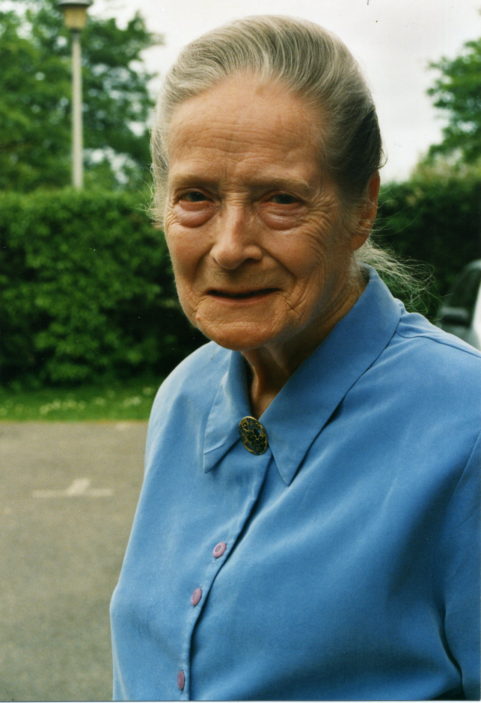 Click on the right facing button beneath the picture to hear the recording.

JR: Just a little introduction bit, this is necessary just so that we can keep a log of the date and where we are and so on. It’s Wednesday the 9th of may in the year 2001 J.R. speaking and I am at the home of Maggie Beaton which is 9 Holden Close. Which is at the end of Railway Place and this small development of newish houses has been built on the site of the original East Station, I think that is correct isn’t it? They are quite near the Great Eastern Pub which is just across the road, Maggie has just been saying that um it’s a shame they have taken down the original sign board,

Maggie: (in the back ground) a very old one

JR: well not the original one but a very pleasing sign board with an engine on it. Now I have come really principally to ask Maggie about life in lower Bengeo because for many years Maggie and her husband ran a shop at the bottom of Wellington Street is that right? ***

Maggie: No it’s the corner of Balfour and Byde Street

JR: Yes Yes. We are somewhere near Wellington Street but not where **** OK that’s fine I just want to check that we are recording.

So can you start by telling us what made you come to Hertford?  Was it, did you see this property and

Maggie: No it was that we decided to buy a property outside London

Maggie: And to start a shop which we had never done before and it just happened that the one at Hertford seem to be the one that fulfilled most of the requirements that we needed.

JR: Um so what part of London do you actually come from? Had you come from North London or

Maggie: Well no I don’t really see what that has got to do with it Jean

JR: Yes I just wondered whether the great. Because you did say to me, well not today but earlier on that you didn’t settle here very well did you?

Maggie: No because Hertford is completely different to London and if you have been living in central London

Maggie: With all the facilities you are going to find Hertford a big shock.

JR: Yes Yes that why I just wondered to compare the two places about how different it actually was. So when you got started and you bought the place and got started how long was it before you realised you didn’t really like it here. Was it straight away or.

Maggie: I don’t really know I suppose it’s a grad….it isn’t a gradual thing because you are plummeted in to a completely different environment and when you are trying to learn a new business from scratch you are so busy you don’t really have time to think whether you like the town or not.

Maggie: You just get on with it

Maggie: But you do just miss all the variety of London

JR: Yes Yes do you think if you had been right in, had a shop in the town centre you would have settled more quickly or? Is it being slightly out of town?

Maggie: No I don’t think so in actual fact that part is like a little village, or was at that time on its own because so many of the people round about had lived there all their lives.

JR: Um Yes so were you accepted as newcomers quite readily by the local people or

Maggie: I think so yes

JR: Yes, so what did you actually sell in the shop? Was it a grocers.

Maggie: There was a Post Office which did most things that small post offices did in those days. We sold all groceries we did our own bacon and cheese cold meats and things like that.

Maggie: And a small amount of vegetables mainly potatoes and tomatoes and things, not a full range of greengrocery by any means.

Maggie: And partly what was in season because life was a lot more seasonal then than it is now.

Maggie: Well no because we took over a business and it extends fairly far round the outskirts, we would go out as far as Stoneyhills and places like that.

JR: Right so you actually

Maggie: Because we had a delivery, there was a lot of deliveries.

JR: OH yes right I hadn’t realised there was a big delivery side to it did you husband do the deliveries.

JR: Was that done by van or?

JR: Oh right, did you have any boys on bike with big baskets.

Maggie: No No it was past that

JR: Oh right past that time was it yes, so what about the difference from say if you can think of a today’s one stop supermarket little supermarket *** shop corner and your shop what would the difference be? Now I mean you now walk in a get a basket

Maggie: Yes well with prejudice I say that you could walk into that shop and ask for what you had come out to buy and the person behind the counter exactly where it was get it for you and you would be served and off.

Maggie: You weren’t plying round yards and yards of things you weren’t interested in.

JR: Yes that’s right but you had to, in the shop you had to weigh some things didn’t you? They weren’t all pre packed.

Maggie: They weren’t all pre packed when we first went there pre, most of that came in in the years that we were there but that was great fun because the shop had a very big old fashioned counter which went sort of… the Post Office along that side and the main……so that you were all behind the counter which you aren’t now, the customers couldn’t get behind the counter.

Maggie: And it had big drawers underneath, big wooden drawers and we used to weigh out things like currents and raisins and you know…not white sugar, white sugar was then packed but certainly the fancy sugars the browns and the Demerara and things like that especially at Christmas time and that was great fun, they used to go into ** blue, do you remember the blue sugar bags

Maggie: And that was all hand weighed but the gradually it got that everything came in pre washed, shopped and packed in cardboard boxes. But we used to buy most of the stuff in huge wooden boxes nuts and whichever country

Maggie: But teas were already packages by then so you didn’t have the……but certainly the things like cheese and bacon were never pre packed they were always freshly cut

JR: I don’t think we have actually said the date on tape it was about 1959 you said that we are talking about now primarily now

Maggie: Yes to the turn of the 6o’s

JR: Yes that right were there still biscuits sold loose then or were they in packets?

Maggie: No there were some biscuit’s sold loose but that rapidly went.

JR: Yes because I remember in my childhood these big jar of biscuits but on their side with the ********

Maggie: You used to get tins too big tins with glass tops

Maggie: But they were quite a temptation for little fingers****glad when those went.

Maggie: Yes we did sell sweet but not loose sweets only in packets

JR: Who looked after the post office side did you or..

Maggie: Well I was the post mistress yes, we more or less shared what jobs there were as it suited us. Because we were both able to do all the jobs in the shop

Maggie: Well if it was your turn to sit down you went into the Post Office Its very much when you are a family business its what need to be doing you don’t have specific tasks.

JR : So who did you particularly remember in those days as your very regular customers or particular friendly ones (discussion) are there any names I remember from other tapes or?

Maggie: I don’t know as I haven’t heard all your other tapes! But certainly a large proportion of people who lived in Bengeo and most of the local people in the street around, don’t forget there were quite a few small few small shops in that area.

Maggie: In those days there were, there would be shops in almost every street corner.

JR: Yes whereabouts I mean I know there were some along Port Vale weren’t’ there.

JR: I hadn’t realise there was one in Nelson Street there was

Maggie: Half way down on the left

JR: What did that sell?

Maggie: That was partly an off licence I think.

JR: Yes I remember I think I can just about remember the one in Elton Road, I think that did photocopying, maybe you wouldn’t know that but I think it did up until about 8 years ago.

JR: OH well it wasn’t there then.

Maggie: That one closed

JR: I went to see somebody in I think it was Fanshawe Street one day to do with the Civic Society and I was giving her some leaflets and there weren’t quite enough and her husband said he would go down the road to this shop that did photocopying, but it may have been your………premises

Maggie: Yes it was because shortly after we had it it was sold to someone one who did office furnishings so it would have been that.

JR: Because Bedwell Garden Machinery came there didn’t it was that after the office side.

Maggie: No that was before

JR: Yes Yes now you actually lives, you were just telling me before the tape started in the property which adjoined the shop was part of…

JR: Yes it was like joined on upstairs and that the front of that house faced into Ba.Ba .

JR: Balfour Street, Yes that’s right at right angles to the shop yes yes and you have given us some photographs to look at, well to keep actually, one of them was an old photograph of when it was Cox’s did you ever get any stories about Cox’s told to you by customers or did any of them remember it when it was Cox’s and come in and

Maggie: Oh yes I think a lot of the older people who were there when we first went had always been customers of that particular shop no matter who was there and had stories of old Mr Cox and his turkeys and Christmas and

JR: Who was the previous shopkeeper to you

Maggie : There were some people called Blackburn who were only there a very short time I think they were Australian.

JR: It was Cox’s before that sometime, maybe not directly