BEHIND THE GREEN BAIZE DOOR IN 18TH CENTURY FLORENCE

The 3rd Earl Cowper in Italy 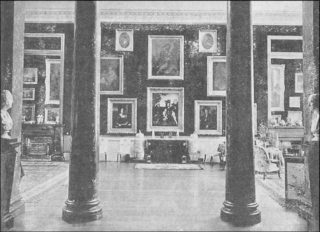 The Picture Gallery at Panshanger 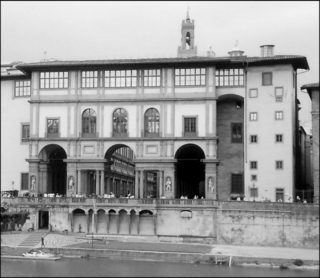 The Palazzo degli Uffizi on the banks of the River Arno.

The Palazzo Vecchio, home of the Medici family.

The Cowpers were one of the most notable families in Hertfordshire in the 18th and 19th centuries.  Reminders of this former grand family are still to be found in the local area.  For instance, there is a road in Bengeo called Cowper Crescent while in Tewin there are many houses built by the family for workers on their estate, that are marked with the Cowper crest.

In last year’s journal, I wrote about the 2nd Earl’s Grand Tour of Europe in 1729-30.  In due course his only son and heir, George, also completed his education by going on the Tour.  However, he caused his father great grief.  The young man found life in Italy so agreeable that he decided to set up house there and become a permanent resident in Florence.  He was free to do as he liked.  He was 21 and not financially dependent on his father, since he had already inherited a huge fortune from his maternal grandfather.

In 1764 the 2nd Earl died.  George, in turn, became the 3rd Earl and received his father’s property and accumulated wealth.  The “Italian Earl” married an English lady in Italy in 1775.  In due course he inherited another fortune, this time from his paternal grandmother’s side of the family and, as a consequence, became one of the richest men in Europe.  In 1778 he bought himself the title of “Prince of the Holy Roman Empire”.  The Italians referred to him as “La Sua Altessima Principe Cupere” (His Highness Prince Cowper).

The Earl lived in great style in the Villa Palmieri which was about a mile outside Florence.  The villa’s household accounts still survive and form part of the Cowper Archives at Hertfordshire Archives and Local Studies.  An Italian-speaking friend has been translating these accounts for me and together, we’ve had a very enjoyable time “going behind the scenes” at the Villa Palmieri and delving into the steward’s well presented account books.

The Earl’s living expenses were enormous and the responsibility for managing his finances fell to his chief steward, a Frenchman, Pierre Jordan, known in Italy as Pietro Jordano.  He had to report to the Earl once a month with the accounts.  According to the account book of 1779, there were about 30 staff on the Earl’s payroll.  They included two stewards and three butlers; two cooks (one of whom was English) and a general kitchen dogsbody; a wig dresser for the Earl and a hairdresser for the countess; three valets, five footmen, two doorkeepers, two carriage drivers and two assistants.  There was one named cleaner, Maddalena Giannassi, and her daughter.  There were also three English ladies, who belonged to the personal staff of the Countess.

In addition to their wages, some members of staff were entitled to meals on the premises, and there were detailed regulations governing how these meals were to be arranged.  The English ladies who attended the countess were served the same meals as the Earl who, of course, ate at the top table.  What food the ladies did not eat, was then sent to the nursery.  Any food left over from the nursery was given to the cleaners.  In the evenings the English “madamas” were served with something direct from the kitchen.

The upper servants were provided with bread and wine and a cooked meal, and they ate whatever was left over from the meals served to the Earl and his wife and their guests. In the evenings small meals were provided for the Earl and his wife.  Any surplus food from these meals was reserved for the sole use of the two stewards.  The lower servants had to buy their own bread and wine, and were entitled to soup and a main dish that was economical to provide.  The pastry cook, Gaetano Sandrini, chose to eat by himself in the kitchen on whatever he could find.

It is evident that the right to dine at the upper servants’ table was highly prized.  There were times when the butler, Franco Bagioli, who was also an expert chocolatier, was extremely busy.  He could not, therefore, perform his normal duties such as setting the tables.  On these occasions the wig dresser, Antonio Pollini, would be required to help set and clear the tables.  Normally he would eat at the third table, but this extra work gave him the right to eat the better food served at the second table of the upper servants.

From the account book of 1779, it seems that Pierre Jordan, the head steward, was trying to introduce an improved system of management at the Villa Palmieri.  Staff who were entitled to purchase food and supplies were instructed to collect signed receipts from the trades people.  Pierre himself would then use these receipts to compile more detailed household accounts.  All the bills were made out to “Signore Pietro Giordano, maestro di casa di S.E. Milor Couper” (Mr Pierre Jordan, master of the house of His Excellency Milord Cowper).

Also, up to that point the head steward had been responsible for a multiplicity of duties, but from now on some of those duties would be delegated to others.  A new employee, Franco Porzolini, who had been engaged as third butler, would be in charge of the best linen and the silver.  Franco Bagioli, (the chocolatier) had not always had enough to do in the past and so he now took charge of the ordinary linen.  One of the door keepers, Antonio Pieronzi, took over responsibility for obtaining the ordinary wine and the oil needed for the lamps.

The accounts contain many details which provide a vivid picture of everyday life at the Earl’s home.  For example, there is information about the lighting.  There were three enormous lamps at the front and rear of the house and in the courtyard.  Another five large lamps were to be found on the staircases, two in the stables and pantry, and one in the kitchen.  There were night lamps for the Countess’ room and for the nursery.  Another lamp was required for the footman who preceded the Earl as he moved about the house.  The two guards at the outer doors each had a lamp and so did the three English ladies.  In addition to obtaining the oil, Antonio Pieronzi was to be responsible for cleaning the lamps.  He also had to keep a separate account for what he had purchased, so that the cost of the whole lighting system could be assessed.

The inventories of the silver and the linen also provide interesting details.  The silver included large serving dishes and other plates, eight salt cellars, eight round gravy boats lined with gold, and three silver corkscrews.  The fine linen included 24 tablecloths and 202 napkins, while the ordinary linen included 42 tablecloths, seven kitchen table covers, 211 sleeve covers (for the servants’ use), and 11 aprons.

While the servants were busy in the house itself, another trio was hard at work in the stables – Ciancho, the chief groom, Romanzini, the second groom, and a stable lad.  The expenses incurred in running the stables included payment for vast quantities of oats, bran and straw, and for such items as sponges, compasses, stirrups and harnesses. There were also invoices to be met from the blacksmith and from the trunk maker who made the luggage boxes.

Whenever a horse fell ill, Giuseppe Grani, the farrier, would give it the same standard medical treatment as 18th century physicians practised on their human patients – they had blood taken from them and they were given laxatives!  A lame horse would have poultices applied to its legs.  Incidentally, two of the animals are listed as “English horses”.  The extravagant Earl could well have ordered these horses to be brought from England to Florence.  We know for certain that horses were brought out to him from England in 1787, but he may well have ordered others long before that date.

The Earl never lost touch with his home country and employed couriers on a regular basis to come and go from Florence to London.  Amongst the nobility in England, he was considered highly eccentric. Horace Walpole, who lived in Twickenham, corresponded regularly with Horace Mann, the representative of the British Government in Florence.  In one of his letters to Mann, Walpole was quite scathing about the Earl.  He wrote:

An Englishman who has never seen his earldom, who takes root and bears fruit in Florence, and is proud of his pinchbeck principality in a third country is… a great curiosity.

However, the Earl was very popular in Florence.  His lavish lifestyle provided trade and employment for a great many people in the city.  Mann informed Walpole that, to mark the birth of the Earl’s first son and heir, “the common people lit bonfires and lights for three evenings.”  To show his appreciation of the people’s support, the Earl ordered that a “large quantity of bread should be distributed to the poor in two parishes”, and he also made “other acts of charity.”

The Earl returned to England only once after he settled in Florence, and that was in 1786 when he stayed for three months.  Otherwise, for all those years his English properties stood silent, empty and dark – both the London town house at Great George Street, Hanover Square and the country house at Cole Green near Hertford.

The people of Florence, having benefited so much from the Earl’s presence in their city, must have been very sorry when he died suddenly in December 1789.  His widow stayed in Italy, but moved to a much smaller house while the valuable contents of the Villa Palmieri were shipped back to England.

Trades people, craftsmen and those who had personally served the Earl, might well have looked back with longing to the work undertaken in connection with the Villa Palmieri.  Bills and wages had always been paid regularly and decent food provided.  The staff who worked for the Cowper family in London and Hertford, however, must have been highly perplexed.  Where on earth would they find room for all the late Earl’s possessions that were being shipped back from Florence to England?  Initially they were stored at Cole Green House, but in due course the 5th Earl decided that a larger country residence was needed.  To this end he decided to relocate the family’s principal residence from Cole Green House to a spot on the north side of the park where there stood a modest house called Panshanger.

It was there at the beginning of the 19th century that work began on transforming the house into a fine mansion, and where for the next 150 years or so, the 3rd Earl’s treasures would enjoy a most worthy setting.

The author gratefully acknowledges the assistance given to her by Anne Marie Parker who first told her about the existence of the Cowper Archives; Maria Porter who has translated the documents; and the staff at the Hertfordshire Archives & Local Studies.